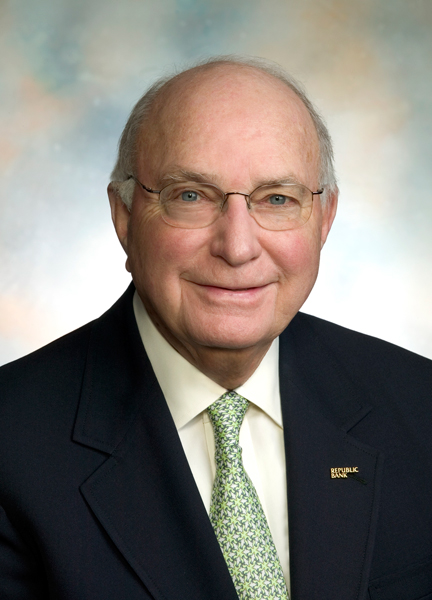 A preeminent businessman, Trager and his wife, Jean, bought a small bank in Shelbyville, KY, in 1977, and it became the cornerstone of the corporation that today is Republic Bancorp, Inc. Today, it has grown to be the largest Kentucky-owned financial institution, with 43 banking centers in Kentucky, Indiana, Florida, Tennessee and Ohio.

“For more than a quarter of a century, Bernard Trager has been an inspiration for me and my friend,” said Alan Engel, retired executive director of the Jewish Community Federation. “He was a true leader who set high expectations not only for himself, but for the entire community – both Jewish and general.

“He remained in Louisville to create opportunities and jobs,” he continued, “often noting that the community had been very good to him, so he was giving back to the community.

“While Bernard will truly be missed,” he concluded, “his legacy to our community will always be with us.”

“Bernard had strong philanthropic values, which he instilled in his family,” said Stu Silberman, president and CEO of the Jewish Community of Louisville. “The Trager family’s generosity has benefited the entire community, and the Jewish community in particular.

“Bernard really understood the power of the community coming together for a common purpose,” he continued. Our community is truly stronger thanks to Bernard’s leadership,” Silberman stated, “and I look forward to continuing his legacy by working with the Trager family for the betterment of our community.”

In 1957, Trager sold that company and began Union Trust, an industrial loan business, and served as its president and CEO until 1977. Upon Linker’s death, the investor’s heirs and Trager sold that company; however, Trager remained with the firm for three more years. At the time of the sale, he ensured that Union Trust’s employees were properly taken care of and were credited with their service toward their pensions.

He served on the Boards of the Health Enterprises Network board, the Fund for the Arts, the Cathedral Heritage Foundation, Greater Louisville Inc./The Metro Chamber of Commerce, Boy Scouts of America, Louisville Community Foundation, and the Louisville/Jefferson County Redevelopment Authority.

In 1999, Bernard and Jean Trager received the Weisberg Brotherhood Award from NCCJ (the National Conference of Community and Justice); and they also were named the 2003 Caritas Foundation Community Leaders of the Year. In 2004, they were honored with the University of Louisville Hickman-Camp Award recognizing their support of the Athletic Department; and in 2006, they received the Jewish Community Center’s Blanche B. Ottenheimer Award in recognition of the difference they made in Louisville. In 2011, he was named Louisvillian of the Year by the Advertising Federation of Louisville.

The Tragers also enjoyed getting others involved in philanthropy. In 2004, the Tragers brought the movie, “Gloomy Sunday,” to the community as a successful fund-raiser for the Jewish Community Federation’s March of the Living program.

Teen Connection: Perfect North The Jewish Community of Louisville’s Teen Connection took advantage of the Martin Luther King holiday from school January 16 to go to Perfect North for a day on the slopes. Twenty-eight middle schoolers participated. “The group …