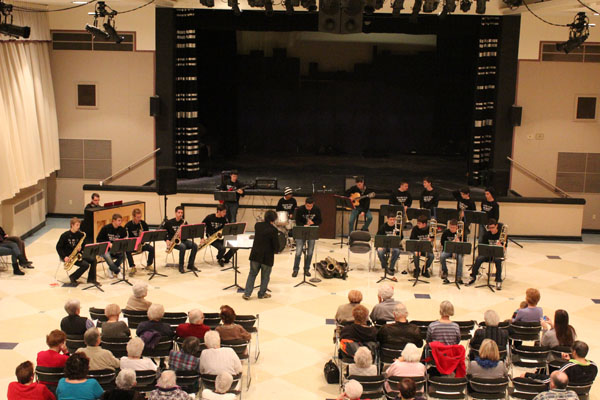 Israel has a rich cultural life and many programs that encourage young artists and musicians. So it is not as surprise that when Louisville hosted the Third Annual Jazz Education Network Conference, one of the groups selected to attend and perform was The Big Band from the Thelma Yellin High School for the Arts.

On Wednesday, January 4, the 20-member jazz group stopped by the Jewish Community Center for a morning concert. They wowed the audience with a variety of music from Swing and Funk to Rock and Latin including “Ain’t Nobody Here but Us Chickens” by Louis Jordan, “What a Difference a Day Makes” by Stanley Adams and “I Believe in You” by Frank Sinatra.

The Big Band, under the direction of Eli Benacot, a graduate of Berkley College, performs a wide variety of music arranged by Bob Mintzer, Toshiko Akyioshi and Bob Brookmayer.

After the concert, the young musicians joined the senior adults for a hot, kosher lunch, filling the Senior Adult Lounge with cheerful intergenerational chatter.

The Thelma Yellin High School, founded 50 years ago, is a national school in Israel dedicated to nurturing the needs of artistically gifted students during their high school years. The program offers six majors, including dance, classical music, jazz, drama, film and visual arts.

[by Ron Kampeas] WASHINGTON, December 2012 (JTA) – With public acceptance of same-sex marriage growing, liberal Jewish groups are hoping the U.S. Supreme Court will strike down the Defense of Marriage Act (DOMA) that they have long opposed. The Supreme …

During the last part of 2011, the Jewish community participated in a number of tikkun olam (the repair of the world) projects, including a Habitat for Humanity home and a wide variety of Merry Mitzvah projects. Amy Benovitz coordinated these …