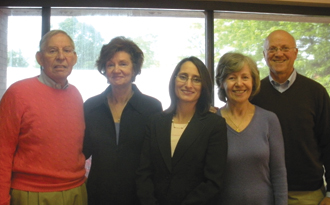 When Dr. Andrea Weiss, the 2012 Goldstein/Leibson Scholar-in-Residence, came to Louisville April 20-22, she taught those who came to hear her how to use the book she edited with Tamara Cohn Eskenazi, The Torah, A Women’s Commentary, as a gateway to understanding scripture.

During her first lecture on Friday evening at The Temple’s Shabbat services, she explained that the book focuses on three aspects of the text: things that relate to women, things that are not clear to contemporary readers on an initial reading and things that today are significant for Jews. To accomplish those goals, each Parasha (weekly portion) is presented with the Hebrew text and an English translation accompanied by five aspects of commentary that address the issues raised by the text.

The first is a “Central Commentary,” written by a scholar with the goal of helping the reader understand the basic meaning of the text. The second, called “Another View,” is a short essay by a different biblical scholar that focuses on specific issues and either supplements or challenges the first commentator’s view.

The third, “Post-biblical Interpretations,” presents selected rabbinic teachings and traditional commentaries. The fourth, “Contemporary Reflection,” offers an essay that provides a perspective that helps people today access and relate to the text. And in the fifth, the Parasha is explored through poetry and other creative responses.

Dr. Weiss also touched briefly on that week’s Torah portion which deals with the death of Aaron’s two sons, Nadav and Abihu, who brought an offering to God that was not prescribed and were killed by a fire from God for their transgression. She explored this topic in greater detail on Saturday morning during services at Congregation Adath Jeshurun.

One of the features that makes A Women’s Commentary unique is its Voices section. Using poetry as a tool to unlock biblical text is unique to this book. But poetry itself can be esoteric and difficult.

At an interactive session at Adath Jeshurun, right after lunch on Saturday, Dr. Weiss had volunteers read aloud selected poems from the book and engaged those in attendance in discussion of both the poems and the text to which they are connected.

For example, “Deliverance: Pu’ah Explains,” by Bonnie Lyons, led to a vigorous discussion of who the midwives Pu’ah and Shifra were and what role they played. Were they Egyptians or Hebrews? How were they able to defy Pharoah’s order to kill male Hebrew babies? How did they relate to their neighbors?

Dr. Weiss presented several other poems as well, and each led to an interesting interchange of ideas.

In her final presentation on Sunday morning in the Patio Gallery at the JCC, Dr. Weiss took a look at King David, exploring texts from First Samuel. She started with David’s first appearance as the youngest child of Jesse who is selected to be Saul’s successor by the prophet Samuel and looked at selected texts through the story of David and Bathsheba.

[by Shiela Steinman Wallace] When more than 70 members of the Jewish Community of Louisville’s Women’s Division gathered at the Olmsted on Thursday, March 29, for A Women’s Evening Out, they were treated to a lively and engaging presentation by …

[by Shiela Steinman Wallace] There are many people who contribute their time and resources to ensure that there is a strong Jewish community in Louisville. Among them is a much smaller group who devote many hours to this cause and …