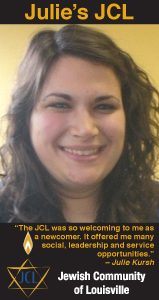 When Ohio native Julie Kursh moved from Cincinnati to Louisville in September, she was eager to become involved in the Jewish community. She had been active with Cincinnati’s Access program that sponsored “tons of events” for young Jewish professionals, and she was concerned that a smaller community might offer less for her to do. Fortunately, that was not the case. In fact, her participation in JCL programs led to an increased involvement in Jewish community life over what she had enjoyed previously.

Although her family held memberships in two Conservative synagogues and she attended Sunday school and Hebrew school growing up in Cleveland, she didn’t really become involved in organized Jewish and secular community activities until she was a student at Ohio University in Athens. She went to Israel on Birthright Israel after her freshman year (she loved it and would be happy to do it again) and served as treasurer of the Women of Ohio University. She also helped prepare dinner for 50 people in need on Thursdays, chaired Alpha Phi Omega, a 150-member service fraternity, and organized trips for 15 people to Give the Kids the World through the Make a Wish Foundation.

When she moved to Cincinnati to teach high school math in nearby Newport, KY, the Federation’s Access for Young Jewish Professionals became her community service and social outlet. With a generous endowment from the Mayerson Foundation, Access sponsored casino nights, happy hours and other fun activities – most at no cost – a real plus for Kursh when she was just starting her career.

Moving to Louisville for a teaching job in Trimble County, a 40-minute drive each way, left Kursh scrambling to find activities that fit into her very limited free time. That’s when the Jewish Community of Louisville’s Young Adult programs answered her needs. She was able to meet the community’s young professionals, attend a regional convention in Dayton and is making plans to take part in an upcoming convention in Cincinnati.

Her friendship with Jodi Halpern and Sam Goldenberg led to Kursh becoming co-advisor of Jay Levine Chapter of BBYO (B’nai B’rith Youth Organization). She and five others were able to attend Tribefest, a national get-together for young Jewish adults held in Las Vegas in March, thanks to an Excellence Grant from Jewish Hospital HealthCare Services and supplemental funding from the JCL. “I loved Tribefest,” Kursh gushed. “It was really fun – lots of great speakers and a great feeling to be surrounded by so many young Jewish people. We gave back to the community, too, by reading with students in a Las Vegas school.”

Kursh really enjoys working with young people and is helping David Siskin, JCC middle school director, with service projects for students in grades seven through 12. They finished planting the JCC garden, collected blankets for tornado victims and helped with the JFCS Food Pantry.

“The JCL really helped me get involved in the community,” she concludes, “and the classes at the JCC provide a great way for me to shape up and meet new people, too. It has been a win-win for me.”

Chabad Chai Center 8701 Shelbyville Road Louisville, KY 40222 (502) 882-0770 Email: chai@chabadky.com In an effort to provide additional programs aimed at the growing unaffiliated segment of the Jewish community of Louisville, Chabad of Kentucky will be opening a new …