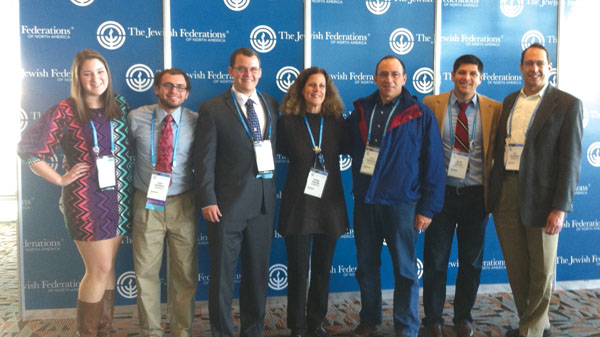 On November 11, four members of the University of Louisville’s Hillel, The Foundation for Jewish Campus Life, traveled to Baltimore, MD, to attend the The Jewish Federations of North America’s (JFNA) Annual General Assembly. We students were excited to see what the event had in store for us.

We began our weekend by meeting other Hillel students from around North America. The Hillel portion of the GA was held on Sunday and we were able to talk to other students about how different our Hillels are.

It was very interesting learning what other events all the different campuses hold every year. We were able to gather an abundant amout of information to bring back to our Hillel, that I truly believe will help us grow and become a more prominent student organization.

It was evident that we are considered one of the smaller Hillels, especially when compared to schools like Indiana University and Brandeis, but I think that with a smaller group of students we are able to have more events and really get to know each other better.

Not only did we attend the Hillel portion of the GA, but we also heard numerous speakers who covered a range of topics. Every day there were a couple of plenary sessions where speakers would come and share their story to all 3,000 plus participants. At these plenaries, we had the chance to meet up with the Federation leaders from Louisville and had the opportunity to discuss our experiences and the sessions we attended that day.

One very notable speaker was Nobel Peace Prize winner and Holocaust survivor Elie Wiesel. Ben Rubenstein, Bellarmine’s Hillel President, said, “Seeing Elie Wiesel speak was so inspirational. I was always such an immense fan of his story and the way he shared it with millions, so to see him in person and hear him speak was really a defining moment for me.”

As the 25th anniversary of the Freedom Sunday March on Washington in support of freeing Soviet Jews approached, Wiesel, along with Natan Sharansky, discussed it and gave us insight into its significance. This plenary was definitely a highlight of the trip.

The General Assembly also had a market place with different booths from around the world, which had information about all things Jewish, from Jewish camps to organizations traveling across America participating in service projects.

In addition, there was also a fun social on Monday night, which took place at the National Aquarium in the Inner Harbor.

This was a relaxing yet entertaining event where everyone could unwind and meet others. The convention center and hotels were very close to the harbor, so when we had a little bit of free time, we were able to explore the Baltimore harbor area.

Attending the GA was a great experience, especially for someone brand new to Hillel, like myself. I was truly able to get a feel for what the Federation does for Hillel and the endless amount of opportunities we, as the future, have available to us. I grew so much over the three-day conference and I am excited to bring back everything we learned and put all the new ideas into action. I am much looking forward to the GA next year, which will be held in Jerusalem!!

A story hour for children, ages 2-4. A craft project and snack is included. Parents or grandparents are welcome. Thursday, December 13 at 1:15 p.m.

[by Shannon Benovitz] For the second year, Ariel Kronenberg has stepped up as a leader in the community and agreed to chair the Young Adult Division (YAD) of the 2013 Annual Federation Campaign. When asked why he chose to serve …