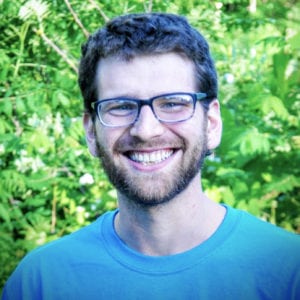 After three years as The J’s point man on all things sustainable, Michael Fraade has decided to make a big life change: He’s going back to school.
Specifically, he’s going back to yeshiva.
Fraade, the director of The J’s Jewish Outdoor Food Farming & Environmental Education program (JOFEE), announced earlier this year he would leave Louisville in August to begin a one-year cohort at the Hadar Institute, a nondenominational halachic yeshiva on the Upper West Side of New York. Its core curriculum includes yeshiva study, community service, Talmud, public programs, student teaching and pedagogy training.
“Hadar is something I’ve thought about doing for many years,” Fraade said. “I did my first program with them eight or nine years ago. It’s an institution that I have an immense amount of love and respect for.”
Fraade leaves a sustainable legacy for The J: a JOFEE a program that grew from a one-year fellowship, to an integral program at The J, raising community consciousness of the environment and sustainable food sources.
In fact, The J is one of just two Jewish Community Centers in the nation with a full-time JOFEE director (the other is Boulder, Colorado).
Fraade credited Jeff Tuvlin, a JCC Association of North America board member, for making Louisville one of the first American cities to support a JOFEE fellowship.
“Jeff kind of heard about it from the JCCA and said ‘Oh, we need to do that here; we have this garden that we want to work on.’”
He was referring to the Community Garden, which existed before Fraade arrived in 2016, but had no dedicated staffer to develop it.
The garden and the Fresh Stop Market, which started that same year, immediately became Fraade’s top priorities.
“There was a strong focus on making sure that we use this as an opportunity to engage people who were not necessarily tied into what was happening at The J,” he said.
Unexpectedly, he also found himself working closely with the Early Learning Center and the Young Adult Division, creating a buzz around environmental and sustainability issues.
“I did not necessarily anticipate when I got here that I was going to work so closely with ELC,” Fraade said, “but the kids are so receptive to going outside and exploring, getting their hands dirty, so that has become a huge part of what we do.”
Other activities that have become legacy events at The J, are the Tu B’Shevat seder, sustainability dinners that promote locally grown produce and other holiday activities.
He also began the compost drop-off station by the archway, giving residents an easy way to support the garden by contributing their food scraps.
“We have hundreds of people dropping off their food scraps, which has been a lot of fun,” Fraade said. It’s definitely one of the messier parts of the job, but I really enjoy seeing it at work…. I’ve had people come up to me and introduce themselves as ‘the people who always give you the coffee grounds.’”
Currently in its four year, JOFEE, a program of Hazon, a national Jewish sustainability lab, is a response to the need for a stronger Jewish response to environmental challenges the world faces.
“Globally, we’re in a climate crisis,” said Yoshi Silverstein, national director of the JOFEE program at Hazon. “We really feel that Jewish tradition compels us to respond, to bring Jewish wisdom to bear on how we cope with these challenges.”
He said Jewish practice is “rich” with teachings regarding nature, land, farming and food.
“All these pieces are at the core of the work of JOFEE and the core where Judaism came from.”
Forty-eight JOFEE fellows have graduated from the program while 18 are currently enrolled.
While Fraade didn’t accomplish all he hoped to do in Louisville, he leaves behind a substantial program for the next JOFEE director, Alayna Altman.
“I’m really grateful that the leadership here took a chance on trying a new program and saying they wanted to be doing innovative work,” he said. “It gave me a home to try a lot of things, to tinker and bring together a lot of things that were important to me.”