She went from being a child in the center of the Middle East conflict, witnessing terror right before her eyes to being the first Arab woman to sit behind an anchor desk in Israel and talk about it.

Lucy Aharish is the first Arab news anchor on Hebrew-language Israeli television and she’ll be discussing just what it means to her and Israel’s Arab and Israeli populations as J Arts & Ideas presents: A Conversation with Lucy Aharish on Tuesday, June 28, at 7 p.m. at The J. 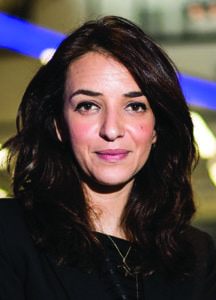 Aharish currently anchors the Evening Edition of i24news and serves as a morning anchor on a current-affairs show on Channel 2. The Ministerial Committee for Symbols and Ceremonies describes Aharish as a “trailblazing Muslim journalist, who brings a discourse of tolerance and interdenominational openness to Israel’s public agenda.” Her ability to bring this openness has landed her roles in Israeli films and propelled her into being an Israeli celebrity.

Noted for her fights against racism and promoting pluralism in Israeli society, Aharish was selected to light the torch that kicked off Israeli Independence Day in 2015. She’ll be talking about living in the shadow of a terror attack and what it’s like to be an Israeli-living-Arab in Israel.

“On Highway 1, I saw Arabs being taken off a van and made to face the wall, with rifles aimed at them. I felt that no human being deserves that. But it’s also impossible to ignore what the Palestinians are doing,” Aharish said.

Born in 1981 in the southern Israeli town of Dimona, Aharish grew up as the only Arab student at her school. Just months before she turned six-years-old, Aharish was injured by a Molotov cocktail thrown at her family’s car in the Gaza Strip by Palestinian militants.

In this program, Aharish will talk about the importance of promoting peace and discuss challenges and opportunities that Israeli society is facing today.

Cultural Arts Director Slava Nelson said it is very important to make Aharish’s program accessible to everyone. “We want our entire community to hear first-hand what it means to be in the middle of the Arab and Israeli conflict. We want to make sure as many people as possible can come,” Nelson said.

Louisville is only one of three cities Aharish is visiting on her U.S. tour.

This summer, CenterStage is embarking on an exciting new venture – the company has established a community partnership with Kentucky Shakespeare. During discussions to explore working together, the two artistic directors, John R. Leffert of CenterStage and Matt Wallace of …

The annual Republic Bank Players Challenge is right around the corner and it’s time to sign up for a day that’s jam-packed with golf, games and fun contests. This year’s event will also include a Bourbon tasting. The 12th annual …

The Maccabi Games are coming and Louisville has a large delegation preparing to compete. The games will be from July 24-28 in Columbus, OH, and Louisville will be competing in basketball, golf, volleyball, baseball and girls’ tennis. For the first …