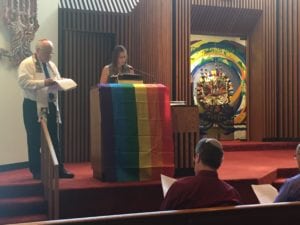 Lori McConnell Fox delivers a reading at the 2016 Equality Shabbat at The Temple. A rainbow flag, the symbol of the LGBTQ movement, draped the lectern. (photo provided by Rabbi David Ariel-Joel)

At a time when LGBTQ rights are under fire in many states, Rabbi David Ariel-Joel believes the most vocal supporters of those rights – in Kentucky or anywhere – ought to be religious leaders.“Actually, religious leaders have a special duty to be helping and supporting the LGBTQ community, because historically we’ve been part of the problem, and not part of the solution,” he said.

“Historically, it was religious leaders, including in our tradition, that were the ones putting stigmas on people because of their sexual orientation,” he continued. “We have passages in our sacred scriptures that I’m not proud of. We have statements from rabbis all through history, and even today, that I’m not proud of, that ostracize and say horrible things about people because of their sexual orientation.”

But Ariel-Joel, a senior rabbi at The Temple, isn’t just saying religious leaders should be at the forefront of the LGBTQ struggle; he, his colleagues and congregants are doing something.

The Temple will host its Third Annual Equality Shabbat Saturday, June 10, 2017 from 9 a.m.-1 p.m. This year’s theme is “Creating a Welcoming Community.” The program is free to the public.

The Equality Shabbat, which falls during LGBTQ Pride Month, celebrates those who are Lesbian, Gay, Bisexual, Transgender, Queer and Questioning (LGBTQ). The Temple is the only Jewish congregation in Kentucky that commemorates LGBTQ Pride Month with a special Shabbat service.

The LGBTQ community continues to face discrimination, according to Ariel-Joel.

“Definitely, there’s a need for anything that we can do in Kentucky for the LGBTQ community,” he said, “especially now that there are new laws that might make it legal to discriminate against people because of their sexual orientation. It’s a big issue.”

Ariel-Joel got the idea for Equality Shabbat from Israel, particularly from one Reform congregation in Jerusalem, Kol Haneshama, which has the same program.

So three years ago, when the rabbi told his then-adult education chair, Aaron Guldenschuh, about Pride Shabbat, he replied “so why don’t we do it here?”

They have been doing it ever since.

Equality Shabbat includes Torah Study at 9 a.m., services at 10:30 a.m., Kiddush and lunch at noon followed by a screening of the film Hineini (Here I am) a documentary about coming out at a Jewish day school in Massachusetts. A discussion will follow.

For Ariel-Joel, the highlight of the Shabbat is always the hakafah (Torah procession) during services.

“We ask anyone who is either LGBTQ themselves or a parent, or a sibling or a child, to join that hakafa,” he said, “so that is like our own small Pride Parade with the Torahs.”

The community response to Equality Shabbat has been generally positive, he said. Some 80-100 people attended last year’s program, including leaders from other faith groups.

Only a few negative responses have been received, Ariel-Joel said. “At one time or another, we considered having extra security, but it didn’t turn out to be a problem.”

The 2017 MOSAIC Award honorees – all representing how newcomers to America can make good and give back to their adopted country – were recognized for their achievements Thursday, May 18, during a celebration at the Hyatt Downtown. In what …

This year’s slate of honorees by the Jewish Community of Louisville include young and old, longtime residents of the city and relative newcomers. Here is a rundown of this year’s winners: Dara Woods When Dara Woods moved to Louisville from …