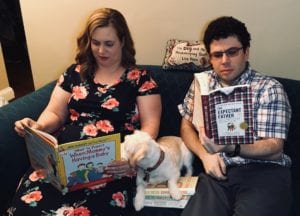 Lisa Sobel-Berlow and Benji Berlow, who went public with their quest to become parents through IVF, are expecting their first child sometime around Thunder Over Louisville. (photo provided by Benji Berlow)

The picture says it all.
There’s Benji Berlow and Lisa Sobel-Berlow sitting on a couch, each engrossed in a book. Lisa is reading What to Expect When Mommy’s Having a Baby; Benji, The Expectant Father.
That’s right, Benji and Lisa are pregnant. The couple’s three-year, $60,000 odyssey to have a child through IVF (In Vitro Fertilzation), virtually every step of which they have shared with the world through their blog and Facebook posts (including the book photo), paid off on August 23 when, after their last embryo transfer, a series of beta-hCG tests – blood tests used to diagnose pregnancy – indicated it was alive and growing.
“Anything over a 5 with a beta test is a sign that you’re pregnant,” Benji said. “Our first test [for another embryo] came back zero, so we knew what could have happened. This one was over 120. We had a subsequent test three days later, and it was over 300, and after another test, it was through the roof.”
They are expecting their child sometime in April.
Benji and Lisa, both of whom work at Jewish Louisville institutions, have gone through two rounds of IVF, the last of which they assigned a Kentucky Derby theme, since the harvesting of Lisa’s eggs at the Kentucky Fertility Institute in Louisville (KFI) came on the day they normally throw their Run for the Roses party. They even let their friends suggest thoroughbred-sounding names for the three eggs that were taken: MyHeartsDesire, Curly-Dave and So-Ber.
So-Ber did not become a viable embryo. Curly-Dave tested “mosaic,” meaning some of its cells were abnormal, though it could be used as a last resort. That left MyHeartsDesire, which was transferred to Lisa on June 19.
But subsequent beta tests showed the embryo did not take.
So Benji and Lisa were down Curly-Dave, which was transferred on July 25. On August 3, the first of that embryo’s beta tests delivered the news the couple had long hoped for.
“At the beginning we were like, excited, but we also know things can go wrong this early,” Benji said. “But week after week, we can see Curly on the ultrasound getting bigger. At first, it’s a flicker. Then you can see the motion of the heart and hear it. It’s great.”
As a result, Benji and Lisa have “graduated” from KFI, meaning they no longer need to be seen there on a regular basis. Lisa actually showed at the clinic one last time wearing a cap and gown.
“We definitely took it a little bit further, but that’s what they call it,” she said. “You’re graduating from the clinic, meaning they feel your pregnancy has progressed far enough that they feel comfortable releasing you to the care of a normal OBGYN.”
But they still plan to stay in touch with KFI, and with Hasidah, a California-based nonprofit organization that assists infertile Jewish couples with the expenses of becoming pregnant, and which awarded Benji and Lisa a $10,000 grant for their second round of IVF.
“They are continuing to support us emotionally, providing us with resources and just checking in with us, but we are also checking in with them,” Lisa said. “Ultimately, KFI and Hasidah want to hear from us when Curly arrives.”
(Yes, they continue to call the fetus Curly, which they have shortened from Curly-Dave. They don’t want to know the sex, preferring to be surprised.)
Rabbi Idit Solomon, founder and CEO of Hasidah, said lesson scan be drawn from Benji’s and Lisa’s experiences.
“They did a tremendous job of surrounding themselves with support,” Solomon said. “The journey through infertility can be isolating and painful. All the support may or may not help with pregnancy, but it keeps people whole along the way.”
Since its founding in 2013, Hasidah’s support has resulted in 11 babies, four pregnancies, and two in process, she added.
Benji and Lisa don’t know if they will continue to call the baby Curly after the bris or naming ceremony. “If Curly has curly hair, maybe,” Lisa said.
One thing they do know: They appreciate all the support they have had from so many people, and they don’t want that network to go away.
“It’s still going to take a village,” Lisa said. “Even though we got past the starting line little bit, it’s still several months to go, and we want everyone to celebrate with us when we celebrate our little bundle of joy.”