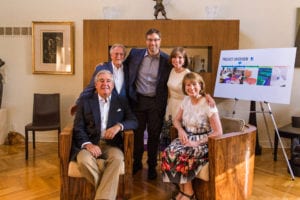 The five community leaders who will be the faces of the JCL’s transformational Capital Campaign to raise funds for the future J and an expanded Dutchmans Lane campus say now is the time to move forward with the next chapter of Jewish Louisville.
Jerry and Madeline Abramson, Frank and Barbara Weisberg, and Dr. Jeffrey Tuvlin, all familiar faces in the community, come from different backgrounds and bring different experiences to the campaign – the Abramsons, for instance, co-chaired last year’s Annual Campaign – but they share a commitment to raise funds to build a new J that meets the needs of the Jewish community for years to come.
“The timing is right,” Barbara Weisberg said, “and it’s time for us to leave a legacy for our children and grandchildren.”
“It is an honor and privilege to work along side these leadership volunteers,” said Stacy Gordon-Funk, senior vice president of philanthropy for the Jewish Community of Louisville. “I am thrilled be in a position professionally to help change the Jewish landscape in Louisville for decades to come with a new J campus and building. As a new grandmother I’m committed to leaving a legacy for those who come after us. It’s a transformational time for all of us.”
The future J will benefit the lives Jews and non-Jews alike.
The Capital Campaign – called “Our Community. Our Future” – is part of a two-track process to assemble the resources for the future J and Dutchmans Lane campus. The campaign track will provide the financial resources to get the job completed.
Meanwhile, the architect, GBBN, is determining where on the campus the new building will be located, what it will look like and how it will be laid out.
Sara Klein Wagner, president and CEO of the Jewish Community of Louisville, said in a statement that the designs will be created in phases and “paced with the Capital Campaign progress.” She said the JCL plans to break ground in 18-22 months.
“This requires more of the vision thing,” Jerry Abramson said. “I think we’ve got to spend time with folks envisioning what is coming, and the opportunities for themselves, their children and grandchildren.”
The co-chairs noted the funds raised wouldn’t just go to constructing a building. It will cover the full cost of campus development, acquiring the Anshei Sfard property, razing the old building and other site preparation.
Frank Weisberg, a retired realtor, lifelong Louisvillian and accomplished artist, emphasized how important it is for the community to understand what a major project the JCL is beginning.
“We’re here to help facilitate it as best we can,” he said. “We all believe in it, and we want to make a go of it, and I think we can.”
Renovating the existing J simply was not an option, said Tuvlin, a gastroenterologist at Jewish Hospital and a member of the JCL Board of Directors.
“It was cost prohibitive, not ADA (Americans with Disabilities Act) compliant,” he said. “It simply was not an option to take the existing structure and put a facelift on it.”
The co-chairs already have plenty of resources to draw from as they begin the Capital Campaign. They pointed to the findings from last year’s charrettes – planning sessions with the community to discuss what they want from a future facility – as well as architects’ meetings with the Federation and J staff, as benchmarks that will inform the design and functionality of the new J.
“There’s been a long process of assessing what the community wanted and felt that we needed to provide, said Tuvlin. “The services that we think are important in today’s community.”
Echoing that, Madeline Abramson, also a JCL board member, said “the support of the community will drive the design rather than the design driving community support.”
The result, Barbara Weisberg said, will likely be a completely different kind of J.
“This is The J of the future,” she said, “so it’s totally different from where we are today.”
While the Capital Campaign gets under way, the Annual Campaign, chaired by Ariel and Faina Kronenberg, continues moving forward.
“We need to keep running the daily operations and programs that we have run with the Annual Campaign while we’re building the future of the community,” Ariel Kronenberg said. “I’ve been saying it at every opportunity we have, and hopefully people will listen.”
Madeline Abramson agreed. “It will be important for us to communicate in our ask for support that this is not a gift in lieu of the annual campaign,” she said. “It’s a gift in addition to annual campaign support.”
There are any number of reasons why people will decide to contribute to the Capital Campaign, Tuvlin said. For him, though, the role that Js play across the country – that of a ground zero where Jews of all backgrounds can come, play, exercise, study – simply grow as Jews –exceeds them all.
“We are part of a movement that engages the most amount of Jews outside the State of Israel,” he said. “That’s an important piece.”