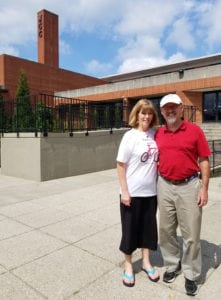 Bruce and Kelley Dawkins are cycling across-country to raise money, and awareness for Alzheimers’ patients. (Community photo by Lisa Hornung)

Bruce and Kelley Dawkins are venturing out on the ride of a lifetime.
The Windy Hills couple – both J members – are riding their bicycles from St. Augustine, Florida, to San Diego, California, to raise funds for the Alzheimer’s Association. They departed on August 31.
The charity is close to their hearts. Kelley’s mother, Patti Ford, 85, suffers from the degenerative brain disease.
No strangers to bike treks, the couple embarked on their first long ride three years ago from the headwaters of the Mississippi River to the Gulf of Mexico. They were hooked, so they decided to do a much longer trip.
“Since we’re going through a lot of problems with her mom with Alzheimer’s, we thought it would be a good way to combine our love of cycling with a way to raise funds for the Alzheimer’s Association,” Bruce, 62, said.
The couple started planning their trip in January, when they got a bunch of maps from the Adventure Cycling Association. The route is an established bicycle route that many others have taken, so they know it’s the safest way to go.
The trip is a little more than 3,400 miles and will take about 60 days. They will likely cover 60 to 70 miles per day, fewer at the beginning.
“We’ll be getting in shape as we go,” Bruce said.
They plan to stay in hotels some nights, but they also plan to camp and couch-surf, too, using a website called WarmShowers.com, which is specifically for cyclists.
For their camping nights, they have dehydrated meals that Kelley, 52, has prepared for the trip. She takes ingredients and puts them in a food dehydrator, then into vacuum-sealed bags. On the day a certain meal is scheduled, she adds water in the morning. By the time they reach camp, the food is rehydrated and ready to cook on a stove.
“Somebody was asking me at the office, ‘Is it like mush?’” Kelley said. “No! You can still see all the individual vegetables – carrots and meat.”
They dehydrate their meals because the water weight in the food would weigh their bikes down.
“The bike weighs so much,” Bruce said. “When you have all that gear on there, there’s no way you can even control it, so you have to make sure the food doesn’t weigh very much.”
Both riders have panniers on the back of their bikes, one filled with food and the other with camping gear. They carry about four days’ worth of clothing, and wash them as they go. They also will have boxes of food shipped to them during the trip by Kelley’s co-workers, and they’ll ship back clothing and items they don’t need anymore, such as off-season garments.
“It’s pretty much shorts and T-shirts,” Kelley said with a laugh. “Even if we go someplace nice, we’re going to be in shorts and T-shirts.”
Their biggest challenge will be crossing the desert.
“There’s two stretches there,” Bruce said. “Each stretch is 80 to 90 miles with no services, so unless you have the food and water and all that, you could really get into bad shape.”
Since they will carry about 500 ounces of water at a time, the couple wisely chose to ride east to west. “If we started in San Diego we’d be hitting the desert, and it would be 110 degrees,” Kelley said.
The Dawkinses managed to get time off from their jobs to do this, which was easier than expected. Kelley, who teaches reading for Langsford Learning Centers, said her bosses were very supportive. “They said, ‘You’ve got to go do this. It’s once-in-a-lifetime!’”
Bruce, an independent insurance agent, is just taking the time off, though he will be working while on the road.
“I won’t be making any compensation during this time,” he said, “but at least I’ll still have a job.”
This bike trip isn’t the only adventure in the Dawkins family. The couple just sent their youngest daughter to France to teach for a year.
“Everything is happening at once and we’re going to be emotionally exhausted by the end of this,” Kelley said. “But we are big believers in the Alzheimer’s Association, and we want to raise awareness for it as we go across the country. If we have time, we’ll go to some of the Alzheimer’s Association chapters along the way in the bigger towns and maybe talk a little bit about our trip.”
Meanwhile, Kelley’s mom, Patti, is in assisted living. For a while, she wouldn’t eat and had zero quality of life, but she has improved since the couple brought in Hosparus.
Last year, they had thought this bike trek would be a memorial trip for her, but Patti’s turnaround has given them new hope.
While the pair looks forward to the joys of travel, they are most looking forward to the people they meet along the way.
“Every journey we’ve ever taken, we’ve just been overwhelmed by how nice and how good people are,” Kelley said. “It’s just reaffirming to me that people are all kind and good – or mostly kind and good.
“And they’re curious,” she added. “You know, ‘What in the world are these two old people doing? These old people are crazy!’”