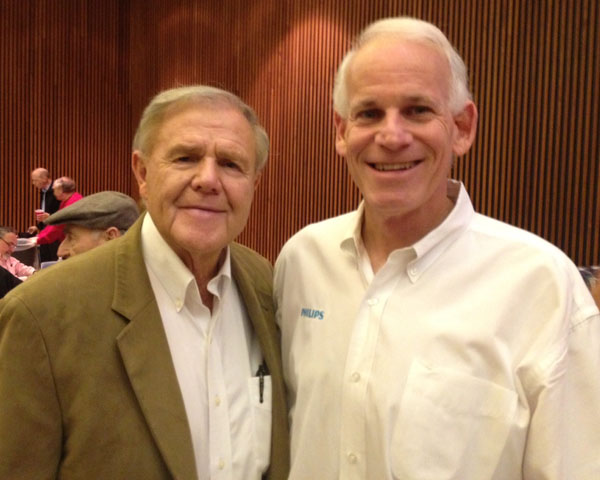 The Temple Brotherhood drew 84 people to the Coach Denny Crum Dinner on February 5 at The Temple. The College Basketball Hall of Famer and winner of two national championships made a point to meet everyone in attendance and posed for countless photos.

Proceeds from the dinner and a raffle for an autographed basketball benefited the Coach Denny Crum Scholarship Fund. Dr. Mel Koby won the coveted prize.

Temple Brotherhood membership is open to all Jewish men and non-Jewish men with Jewish partners and is a major supporter of community programs such as the Jewish Film Festival, Chavurat Shalom and scholarships to Camp GUCI (Goldman Union Camp Institute).

With a cast of more than 60, CenterStage is bringing one of the best-loved Biblical dramas to life with Joseph and the Amazing Technicolor Dreamcoat, presented by Hilliard Lyons, now through March 3 at the Jewish Community Center. Billed as …

[by Lewis Rowe] Rabbi Joe Rapport welcomed the 40 scouts of Troop 30 to the January 25, Founders Day and Scout Shabbat at The Temple. The scouts and their parents recited the blessings for candles and wine to welcome the …

Joseph and the Amazing Technicolor Dreamcoat Presented by Hilliard Lyons and Greg & Melinda Vincenti February 21- March 3, 2013 For tickets call 502-459-0660 or order them online by clicking here. There is a small convenience fee for online ordering. …