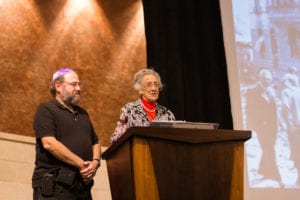 Ann Dorzback describes what she remembers about Kristallnacht as her son, Bob, listens to the telling. (Community photo by Tara Cocco)

Hans Bensinger.
Ann Dorzback.
Dan Streit.
Herta Beskin.
Ernie Marx.
They all had a story to tell about Kristallnacht, the night of November 9-10, 1938, when Nazis and their sympathizers, in a planned rampage through Jewish quarters in Germany and Austria, looted and burned synagogues, homes and shops, murdered scores and sent thousands more to detention at Dachau concentration camp.
But they told their stories through the eyes of children at the annual Karistallnacht commemoration on November 8 at Adath Jeshurun.
Dorzback was 17 at the time, Bensinger, 10; Beskin, 11; Marx, who is now deceased and whose story was recounted by two teenage girls, was 13.
The fifth storyteller, Streit, would not be born until one year after Kristallnacht, but his very life depended on what happened that night.
His father hid in a Hamburg cemetery behind a headstone the night of the violence, Streit said, tipped off that the Nazis were coming for him.
“Had my father not been tipped off,” the burly, ded Streit told the crowded sanctuary, “I would not be here today speaking to y’all.”
Though the program commemorated the night in 1938 that arguably marked the start of the Holocaust, it could not be separated from the shootings at Tree of Life * Or L’Simcha synagogue in Pittsburgh two weeks earlier.
But Rabbi Joe Rooks Rapport of The Temple noted a critical difference:
“Imagine how different Kristallnacht might be remembered if the very next Sabbath, Jews could have gathered in their synagogues across the land surrounded by friends and neighbors of all faiths, clergy and lay people alike,” Rapport said, “standing together against such acts of hate and making a stand for the rights of all people to practice their faith in freedom and safety from harassment or attack.”
During the one-hour program, Dorzback, now 97, recalled how her parents tried to calm her and her sister, who were away at school during Kristallnacht, by telling them they were away from home, vacationing in the Black Forest.
When the girls returned home, they got the truth. Their father also announced that the family would leave Germany.
“A country that has no respect for a house of God has no respect for a human life,” his grandson, Bob Dorzback said, recounted his grandfather’s words.
Bensinger and his daughter, Karin Applebaum, described what Bensinger had seen that night. (He recalled Gestapo agents arresting his father, and sending him to Dachau.)
Carol Klein, daughter of Beskin, described how a great-uncle in Cleveland managed to bring her mother and parents from Germany after Kristallnacht.
Avery Ramsey and Sarah Kwasny, eighth graders at St. Francis of Assisi Catholic School, told Marx’s story, describing how Gestapo agents arrested his father, then forced him him to choose one of his children to come with him. He choose Marx.
Cantor David Lipp sang Muss I Denn, a German folk song, and You Want it Darker, a song from Leonard Cohen’s final album. Cantor Sharon Hordes chanted El Maleh Rachamim.
St. Francis of Assisi teacher Fred Whittaker, and Rabbis Stanley Miles, Beth Jacowitz Chottiner Michael Wolk and Robert Slosberg also participated in the program.
Echoing Rapport’s comments, Miles said of the people who gathered in synagogues following the Pittsburgh shootings to show their support, “No, my friends, this is not the same world [as Nazi Germany]. Thank God!”