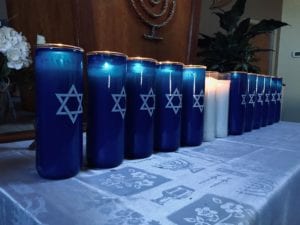 Eleven shiva candles and two votive candles were lit for the Tree of Life and Kroger shooting victims Friday, November 2, at Temple Shalom as part of #StandUpForShabbat. Similar programs were held at synagogues across Louisville and the nation. (Community photo by Lee Chottiner)

(Editor’s note: In the wake of the shootings at Tree of Life * Or L’Simcha in Pittsburgh and the Kroger in Jeffersontown, area congregations opened their doors for #ShowUpForShabbat, a nationwide campaign by the AJC and Jewish Federations of North America as an act of solidarity. The following is a recap of how Louisville synagogues observed the occasion.)

Anshei Sfard
This past Shabbat the turnout at Anshei Sfard swelled as Jewish visitors from the community who do not regularly participate in our services, as well as non-Jews, attended to show solidarity with the Jewish community.
Rabbi Simcha Snaid welcomed everyone, addressing the tragedy in Pittsburgh, and referencing lessons for people in going forward with their own lives.
He referenced the lesson from the previous week’s parshat, HaShavua, in which Abraham is called a God-fearing man. Snaid compared this reference to Avraham to the prophet Obadiah, who was called a “very God-fearing Man” because of his empathy for the hundreds of other true prophets and his willingness to put their lives before his own in granting them sanctuary and protection from Queen Jezebel and King Ahab who sought to destroy them. Snaid also referenced Moses, remarking on how strange it is that the Torah states that Moses grew up. Why is that important; isn’t it obvious?
Because although Moses grew up in the palace and a life of ease and luxury, when he saw and understood the suffering of the Jewish people and took action to save and protect them, again demonstrating empathy, “I am with you in your suffering.”
Finally, Snaid noted the words of the Pittsburgh shooter, “All Jews must die,” to highlight that his intentions were not to kill the Orthodox or the Reform, or any other division that humans created. Therefore, in this post-shiva week, as the healing and planning go forward, people need to overlook these divisions and show that Jews are together.

Adath Jeshurun
Cantor David Lipp knew this Shabbat would be special when he arrived early to 40-50 already seated, ready for the service to begin.
“I knew there would be more people than usual and I told the two b’nei mitzvah that were going to be there to ‘practice’ their parts of the service to expect it,” Lipp said, “but I didn’t anticipate 500-600 would be responding to their Ashrei, to their taking out and bringing back the Torah, and their kiddush.”
Frank M. Smith, Jr., executive vice president of Simmons College and Haleh Karimi, executive director of Interfaith Paths to Peace spoke at the service, along with Rabbi Bob Slosberg. Chris Hartmann of the Fairness Campaign, U.S. Rep. John Yarmuth, Louisville Mayor Greg Fischer, and Edgardo Mansilla from Americana also shared the bima.
Mansilla and Hartmann led respectively prayers for the country and for peace. Yarmuth, in his comments, hoped that Americans could do better than merely “tolerate” the other, and Fischer doubled down on his commitment to maintaining and expanding the notion of a more compassionate Louisville.
Karimi spoke her “litany of loving truth,” Lipp said, while Slosberg called on the community to urge the Expo Center to avoid displaying or selling Nazi and other hateful memorabilia.
Smith emphasized the need for finding ways to harmonize with one another rather than assuming we need to always “sing in the key of C-major, in unison, without modulations.”
Having preceded his talk with Leonard Cohen’s Halleluyah, Lipp also sang Chana Rothman’s We Can Rise, inviting the congregation to harmonize. “For the first time I can remember doing so, I sang Adon Olam … to the melody of Amazing Grace,” he said. “Although I don’t ascribe to all the words of that moving hymn, I certainly felt there was a great deal of grace in Adath Jeshurn’s main sanctuary on Shabbat morning.”

Keneseth Israel
Rabbi Michael Wolk did not know what to expect going into #ShowUpforShabbat.
“While going to shul on Shabbat is the most natural thing in the world for me,” he said, “it’s difficult for people to just walk in and know what is happening at any given moment. As a rabbi, it is also challenging to plan and lead services when you know that there will be many people who do not know the rhythm of Shabbat services.
“That said,” he continued, “I was overwhelmed by the feeling at KI on Friday night and Saturday morning.  Many of our congregants who are not usually at shul on Saturday morning came and we were joined by several non-Jewish neighbors who wanted to express their support for the Jewish community.”
On Saturday, Jesse Waters, a local self-defense instructor told the congregation on how to react should an active shooter enter their building. Wolk described the Pittsburgh shootings as a symptom of the worst failings of American society, which include hatred and fear of “the other” and the “inability to regulate the use of weapons of war in any way.”
But he also spoke about how this was a distinctly Jewish tragedy and as the most recent example of the “world’s oldest hatred.”
He spoke briefly about each of the 11 victims and we recited the El Moleh Rachamim and the Kaddish in their memory.
“I cannot think of a more fitting tribute to these 11 souls than to honor their memory on Shabbat in shuls across the country,” Wolk said. “They each valued being part of their shul and inspired countless Jews to participate in their traditions this Shabbos.”

Temple Shalom
Turnout for #ShowUpForShabbat more than doubled normal attendance at the Friday and Saturday services.
On Friday, Rabbi Beth Jacowitz Chottiner set out on a table at the front of the sanctuary, 11 shiva candles for the victims of the Tree of Life*Or L’Simcha shootings in Pittsburgh and two votive candles for the victims of Jeffersontown Kroger shootings. One by one, worshippers stepped up, read a name of a victim, and lit a candle.
She also had congregants read 13 sayings — one for each victms — by 13 historical figures and books: Martin Luther King, Jr. (twice), Albert Einstein, Rabbis Joachim Prinz and Abraham Joshua Heschel, Mother Theresa, Publius Syrus, Elie Wiesel, Emanuel Cleaver, Mahatma Gandhi, Amelia Earhart, and Leviticus and Deuteronomy.
The two guest speakers were Pastor Roy Coleman of the Victory Christian Center church, which meets Sundays at Temple Shalom, and Ron Skillern, the 2017 Kentucky Techer of the Year and curator of the Holocaust Mural Collection from Western Kentucky University. He displayed two of the murals at the Friday service.
Coleman, who grew up in Missisippi said he  witnessed “much of the evil against people of color,” and he decried attacks on blacks and Jews.
“For the families, friends of those killed at Kroger, and in Pittsburgh, and all of us, we know from Psalms: ‘Weeping may endure for a night, but joy comes in the morning,’” he said.

The Temple
Rabbi Joe Rooks Rapport called #ShowUpforShabbat at The Temple “a powerful reminder of the strength of our community as we mourn together, pray together, and confront together the challenges of bigotry and hate.”
The sanctuary was filled to overflowing with more than 500 people in attendance, he said.
Members of the congregation gathered with friends and neighbors, university students, and leaders from the interfaith community to remember the lives lost at Pittsburgh’s Tree of Life synagogue and here in Louisville at the Kroger shooting.
The service featured a candle lighting and moment of remembrance for each of the lives lost as well as a sermon on the future of Jewish life in this land in the aftermath of these tragedies.
“It was an emotional night,” Rapport said, “and people remained afterward, sharing their thoughts and feelings with one another long into the night.”