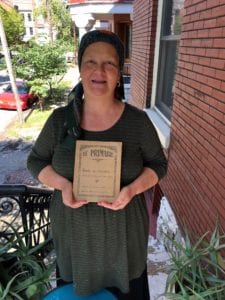 Natalie Polzer will soon send her father’s notebooks to the United States Holocaust Memorial Museum for archiving. Jacob Polzer his used notebooks for school lessons, sketches and maps while his family stayed in Vichy France from 1940-41 – one step ahead of the Nazis.

For most Jews fleeing the Nazis, the war years were a dark time shrouded in fear and uncertainty.
Not always so for their children.
Joseph Polzer, in particular, was protected at a chateau in Vichy France from 1940 to 41, where he, his parents and other Jewish families were taken in – one step ahead of the Germans.
To young Joseph and his friends, it was all a big adventure.
“They went swimming and they would walk to school,” said his daughter, Natalie Polzer. “They would skip school and roast potatoes in the woods with a fire. And they would hide out; they had like a secret hiding place in the attic [of the chateau]. It was only happy, happy memories.”
Natalie knows this because her father, while still just a boy, filled three notebooks with his experiences.
During his days at Chateau Du Chaumont near the city of Limoges, Joseph and his friends used notebooks instead of textbooks, writing down all their lessons from school. They even recorded their own report cards.
But Joseph, a creative child who would grow up to become a professor of art history at the University of Louisville, went much further. His notebooks include sketches of himself and the chateau (which has since burned down), cartoons, doodles, even colorful maps of meticulous detail.
Joseph’s notebooks are portals to the lives of Jewish children on the run.
Which is why Natalie, a professor of humanities at UofL, will be donating them to the United States Holocaust Memorial Museum in Washington, D.C.
“I want historians to use these,” she said. “I think they would be very useful to people who are doing research of various things, and there are very few artifacts from these homes.” 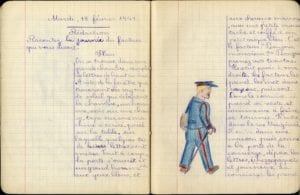 This cartoon of a postman, drawn by Joseph Polzer, illustrated an essay in one of his notebooks.

Natalie showed her father’s notebooks to Community during a recent interview at her home in the Highlands. Flipping through the pages of each paperback volume, she would stop at sketches he made of himself and the chateau, a doodle of a woman chasing a man (“He’s just playing around here.”), a cartoon of a postman that went with an essay he wrote, and his maps.
She even produced a roughly folded sheet of paper with ink splotches, which her father used as a blotter. (He drew with a fountain pen.)
She also pointed out the penmanship lessons, math homework, report cards (signed by his father), and another essay he did on Marshall Philippe Petain, the president of Vichy France, who would stand trial for treason after the war.
“Normalcy jumps from these notebooks,” Natalie said.
His parents knew better. The son of non-Jewish Austrian father and a Russian-Jewish mother, both of whom were communists, Polzer was forced to flee Austria in 1938, along with his parents, following the Anschluss (annexation by Germany). They eventually slipped across the border to France, where an agency assisting fleeing Jews, L’Oeuvre de secours aux enfants (The Organization for Helping Children), which still exists, put them up at the chateau.
All the while, Joseph’s parents, Mirrha and Karl Polzer, protected their son from the reality of the danger they faced.
“There was no indication from what my father said that anybody was frightened,” Natalie said. However, “my grandmother, her stories were scary.”
Kids in the chateau who had just one Jewish parent – called “half-Jews” – were distinguished from the other Jewish kids with two Jewish parents.
“They didn’t have all the [same] classes with them,” Natalie said. “They didn’t participate in religious services with them.” 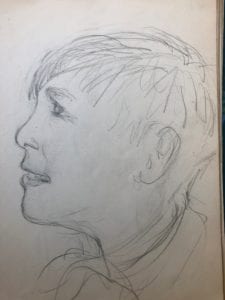 A self-image of Polzer, which also appears in his notebooks.

By 1941, Joseph and his parents managed to enter America, sponsored by Quakers, but keeping quiet about their communist sympathies.
After Joseph died on Nov. 17, 2018, Natalie decided to donate the notebooks to the USHMM, spurred by a photo of her father playing at the chateau, which she found on the museum’s website. He had been misidentified in the caption.
When she contacted the museum to point out the error – and why she knew it was an error – “they jumped on me right away,” she recalled. “They really want things – especially children’s art – [about] children’s experiences; that’s the one thing they really want to add to their collection.”
In fact, the museum staff combed its archives for details about Natalie’s father and shared them with her. In return, she decided to give them the notebooks.
Raymund Flandez, communications officer for the USHMM, said it was the museum’s procedure not to comment on donations of artifacts until after they have been received.
Not only does Natalie hope her father’s notebooks will be helpful to researchers, she also wants them to cast a spotlight on at-risk children today.
“So many children live in pain, anxiety and fear, owing to poverty and lack of safety and family security,” she said. “In whatever way we can, our priority as a society should be to protect our children.”