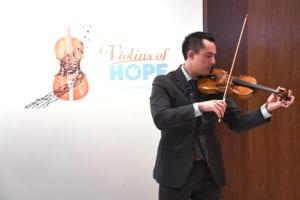 The first time Gabriel Lefkowitz was handed the Auschwitz violin, he treated it like an archeologist handling an ancient artifact.
That is to say, he treated it gingerly, turning it over, inspecting it from eye level, familiarizing himself with its fingerboard.
After all, it was unlike any violin he had ever held before.
But Lefkowitz, concertmaster for the Louisville Orchestra, soon took a bow in hand and pulled it across the strings. Strains of the theme from Schindler’s List filled the lobby of the Frazier Kentucky History Museum as school children leaving the building turned their heads, and reporters and photographers listened raptly.
It was the first of two short pieces Lefkowitz played for the media on the historic instrument, the other being from Bach’s Andante Second Violin Sonata. Together, the pieces served notice that the Violins of Hope had arrived in Louisville.
Violins of Hope is a collection of string instruments, mostly violins, that survived the Holocaust, some of which were played in Jewish ghettos or concentration camps as inmates went to the gas chambers.
Thanks to Israeli luthier (violin maker) Amnon Weinstein, many have been restored and are sent to orchestras around the world, making music again despite their dark past.
Each instrument, through its sound, touch and appearance, has a story to tell.
“It’s like getting to know a new person,” Lefkowitz said of the Auschwitz violin, or any violin in the collection.
“Every violin has some different physical dimensions,” he continued, “but also a different soul and a different approach that’s needed to get the best possible sound out of the instrument.” 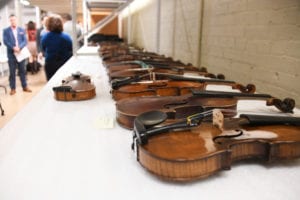 Many of the instruments in the collection will be exhibited at the Frazier, but will not be played.

The media got a sneak-peak at the Violins of Hope collection on Thursday, Oct. 10 at the Frazier.
Fifty instruments are in Louisville, 22 of which will remain on display at the Frazier from Oct. 17 to 27; 16 will be performed by the LO at its Signature Classics Concert on Saturday, Oct. 26. The remaining instruments will visit venues, including synagogues, churches and schools.
Many of the violins that will be exhibited at the Frazier show their age, and their scars. Some remain unstrung or are held together by ribbon or string. One instrument, notoriously called the Heil Hitler violin, has a swastika scrawled on its inside top along with the words “Heil Hitler” – the dirty work of a German luthier, who made the marks in 1936, unbeknownst to the owner. It wasn’t discovered until years later, when the instrument was sent to another luthier in Washington, D.C., for work
The luthier donated it Weinstein’s collection, where it remains, but it will never be restored or played, a stark reminder of the past.
The Auschwitz violin, which Lefkowitz will play at the Oct. 26 concert, has its own special story. It was owned by a survivor of the concentration camp who played in the men’s orchestra there, which performed as inmates were sorted for labor or the death. After the war, the survivor, then in a displaced persons camp, sold the violin for $50. The buyer later gave it to his son who donated it to Weinstein’s collection.

Some of the instruments in the collection, such as the infamous Heil Hitler violin, have not been restored, but are still exhibited.

For Lefkowitz, performing on this violin is especially meaningful, for he, too, had family in concentration camps.
“I had extended cousins and family who were at Auschwitz even,” he said, “so the chance to play on the Auschwitz violin is chilling to me and a spectacular opportunity to interact directly with history.”
Andy Treinen, vice president of the Frazier, welcomed the exhibit to the museum, saying it will be free to the public while here.
“Because of its importance, because our mission is to ignite the human spirit,” he told reporters, “we welcome the public to come in.”
Miriam Ostroff, a Jewish Louisville community activist, who was instrumental in bringing the violins here, was present at the media event.
“You have to think about what these violins survived to get here,” she said. “No people or children should ever have to survive that kind of stuff just so you can hear pretty music.”
She added that the music these instruments make will remind those who hear it of the people who didn’t survive to hear it themselves.
“I think that is the lesson of the violins.”

Want to go?
The Jewish Community of Louisville, which was part of the effort to bring the Violins of Hope here, is co-sponsoring two programs:
“Repairing the World Through Music and Story,” 6 p.m., Tuesday, Oct. 22, at the Cathedral of the Assumption, hosted by the Center for Interfaith Relations and the JCL, will present stories and prayers of healing and hope, and featuring Grammy award-winning musician Johnny Gandelsman and 12 violins from the collection.
Bellarmine University’s 2019 Guarnaschelli Lecture, 7 p.m., Wednesday, Oct. 23, featuring James Grymes, author of The Violins of Hope: Instruments of Hope and Liberation in Mankind’s Darkest Hour.