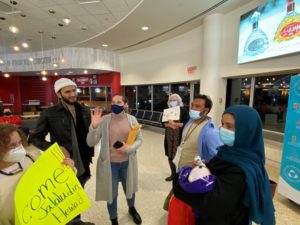 Jalaludin and Razia Shirzad, and their infant son, Hewad, pictured here being greeted at Louisville Muhammad Ali International Airport on Thursday, Nov. 4, by members of Temple Shalom and officials from Kentucky Refugee Ministries, are the first synagogue-sponsored Afghan family to be settled here. A second family, sponsored by Keneseth Israel and its preschool, arrived Wednesday, Nov. 24. (Community photo)

Jalaludin and Razia Shirzad were mere children, growing up in the remote Afghan province of Nuristan when U.S. troops were deployed to the country in 2001.
It was a simple life. Most people in the hilly region were shepherds; some were farmers. It’s the kind of place where marriages are still arranged between families.
Twenty years later, Jalaludin, 28, and Razia, 26 – who wedded through one of those arranged marriages – just became parents. Their 5-week-old son, Hewad, was born on Oct. 20.
Unlike his parents, though, Hewad will not grow up in Nuristan. In fact, he may never see Afghanistan at all.
Hewad was born in a Washington, D.C., hospital – a U.S. citizen by birth – yet still part of the wave of thousands of Afghans who fled their homeland after its fall to the Taliban. By comparison, Jalaludin and Razia will have to wait one year just to apply for asylum.
Jalaludin, who served with U.S. forces during the 20-year Afghan war, doesn’t know what he will tell his son about his ancestral country when he is old enough to understand. Maybe he will say nothing at all.
“As you know, the situation is bad, “Jalaludin said through an interpreter during an interview with Community in new South Louisville apartment. “It wasn’t even good to begin with. The system, when it was the republic, was messed up, and now that the Taliban have taken over, it’s messed up again.
“So, I don’t what I should tell Hewab about Afghanistan,” he continued, “and up to a point, I don’t want him to know anything about Afghanistan because I don’t want him to have that pain.”
The Shirzads are one of 79 Afghans to be resettled in Louisville so far through Kentucky Refugee Ministries, and the first to be sponsored by a Jewish congregation here.
Temple Shalom, the sponsoring synagogue, has purchased bedding, kitchen supplies, groceries (including halal meat) and other necessities for the family. One member of the congregation, a pediatrician, gave young Hewad a checkup one day after his arrival. Others have visited the family, providing, among other necessities, a large bowl to make nan bread.
Other synagogues, including the Keneseth Israel, The Temple and Adath Jeshurun, have agreed to sponsor families. KI’s family, also a family of three with a baby (who was born in Afghanistan), was expected to arrive on Wednesday, Nov. 24.
The Jewish Community Center ran a collection drive; the Jewish Family & Career Services opened the Meyer Food Pantry and NCJW-Louisville Section provided help from the Nearly New Shop.
Now comes the process of actually resettling the families.

Growing up, Jalaludin’s and Razia’s lives took different paths.
Razia went to university, her husband said, and went on to teach at a government school in Nuristan.
Jalaludin attended high school and had hoped to continue his studies. But there were few opportunities, so he went to war instead.
The couple has been married for one year.
“I was a soldier. It was in the Kandahar province; I was a U.S. soldier,” he said through his interpreter. “We only went on two or three operations for fighting. Other than that, I was mostly guarding other people.”
He made it clear that he fought for the Americans, not for the Afghans.
“I had nothing to do with the Afghan army,” he said. “It was all the U.S. soldiers. I was paid by U.S. soldiers; I was doing everything with U.S. soldiers.”
He said he served for about five years.
But as the Talaban advanced and the country collapsed, he and Razia fled to the capital, Kabul. He took off his uniform, and the two made their way to Hamid Karzai Airport, where they waited for two to three days before getting on a flight out.
First, they were flown to Dubai, where they waited for 15 days. After that, they were moved to Quantico, Virginia, just before Hewad’s birth.
“That was the happiest day,” Jalaludin recalled.
Though Afghanistan was once home to an ancient Jewish community, Jalaludin said he knows little about it.
“It was a long time ago,” he said, “and people don’t even talk with each other about Jewish.”
Now, though, he said his family would be pleased to visit a synagogue, especially during Chanukah, “if you will allow us.”

By Community Staff Fresh out of college, Louisville native Abigail Goldberg has joined the Jewish Federation and Jewish Community Center as Teen Director and Philanthropy Outreach. Goldberg will oversee BBYO and Teen Connection as well as serve as the new …