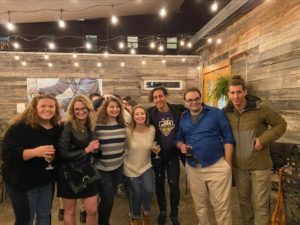 Fresh out of college, Louisville native Abigail Goldberg has joined the Jewish Federation and Jewish Community Center as Teen Director and Philanthropy Outreach.
Goldberg will oversee BBYO and Teen Connection as well as serve as the new Hillel director, working with students on four area college campuses, including the University of Louisville (UofL) and Bellarmine University.
Goldberg will also serve as young adult engagement coordinator under the Federation, developing programming and a sense of community for young adult Jews living in Louisville.
In other words, Goldberg is responsible for programming for all Jewish young people save those who are still pre-b’nai mitzvah.
Goldberg, who was active in BBYO growing up, went to Jewish summer camp and helped run the Jewish Culture Club at her alma mater, Longwood University in Farmville, Virginia, said she’s excited about the challenge.
“It is a lot, but I’m very optimistic about the opportunities within this community and the people that I have connected with. I know it’s a big task with all of these jobs, but I have a good support system to make these kinds of events happen.”
Her job has been made more difficult by the toll taken on local youth groups by the 18-month COVID pandemic, which forced all programming online and hobbled member retention.
“I think it was hard when the pandemic hit and students in high school and in college had to go virtual,” Goldberg said. “It hurt a lot in retention. They want face-to-face connection. Now,” she continued, “were having a lot more in-person events. We’re growing again.”
In Hillel’s case, there are 10 currently active participants at UofL, which has been a largely student-led organization for the past years. Bellarmine University, JCTC and IUS have fewer but are on a mission to expand.
“The Hillel community is very small,”
Goldberg said, “but they have a want to be involved and a want to grow and find new members.”
Same for BBYO. While Jay Levine BBG is “flourishing” with its own officers and calendar of events, Goldberg said Drew Corson AZA struggled during the pandemic and must be reestablished.
She is finding interest among the boys, she added, and expects the upcoming Drew Corson Basketball Tournament, which will be held in Louisville, to generate enthusiasm.
“It definitely takes a lot of time re-establishing something that has not been there recently,” she said.
Finally, the Young Adult Division has its own growth opportunities, which also come with challenges.
Many of the participants who have expressed interest are newcomers to Louisville with few connections here. So, Goldberg, who has been away from the city herself for much of the past four years, is working to establish a relationship with them.
“Most of my job right now is finding the right people to connect with to grow each division group,” said Goldberg, who credited her JCC colleagues Katelyn Graves and Alayna Altman, for helping her to connect with young adults.
Daughter of Brian and Deborah Goldberg, Abigail Goldberg grew up in Louisville, belongs to Adath Jeshurun, was active in BBYO and Teen Connection, and attended Camp Ramah in Wisconsin for seven summers – an experience that was made possible with Federation assistance.
“I could only go to camp because of my synagogue, the Jewish Federation and the scholarships I received,” she said.
At Longwood, where she majored in psychology with a minor in business administration, Goldberg learned leadership skills when she shared the programming responsibilities for the Jewish Culture Club.
The results included a fundraiser on Yom Haatzmaut and a Chanukah program where she and others fried some 100 doughnuts in one evening.
“(We) almost started a fire,” she quipped, “but we were fine.”
She believes the experience of growing a Jewish organization on a campus with few Jews will serve her well as she works with young people to reenergize youth groups locally.
Though she is splitting her time between several responsibilities, she is getting assistance from Hillel International, meeting with the regional advisor and taking seminars with directors in similar situations.
“I’m not alone in any aspect of the job,” Goldberg said. “There are multiple resources for every age group to help me be successful.”

Human Resources Lee Chottiner COP26, the just-concluded United Nations Climate Conference in Glasgow, Scotland, was hardly everything environmentalists – Jewish environmentalists in particular – had hoped for. Leading developed nations did agree to reduce methane emissions. There were commitments to …

By Lee Chottiner Community Editor Jalaludin and Razia Shirzad were mere children, growing up in the remote Afghan province of Nuristan when U.S. troops were deployed to the country in 2001. It was a simple life. Most people in the …