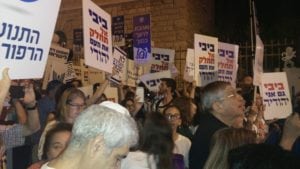 (Editor’s note: This story is based on reporting by Rabbi David Ariel-Joel who was at the rally and has been meeting with Jewish leaders in the country this past week.)

Israelis rallied outside the prime minister’s home in Jerusalem Saturday night, July 1, to protest the government’s suspension of a historic agreement to open the Western Wall (Kotel) to egalitarian worship.
In addition to music, chanting and sign waving, several prominent Israelis spoke at the gathering to register their displeasure with the government’s action. 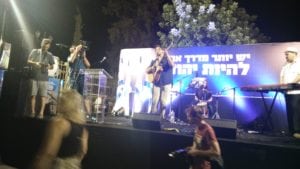 Music groups performed at the rally in addition to noted Jewish leaders who took their turns at the mic. (photo provided by Rabbi David Ariel-Joel)

“This decision is abandoning Zionism,” Michael Oren, Israel’s former ambassador to the United States who was involved in drafting the Kotel agreement, told the Yidiot Achonot newspaper. “The Kotel belongs to all Jews. This despicable decision sends a sharp message of division and alienation to Diaspora Jews at the same time that with no shame we are leaning on their support.”

Rabbi David Ariel-Joel, a senior rabbi of The Temple in Louisville, who is in Israel, attended the rally and sent back several photos to Community, which are posted here.
“The entire road was filled with a few thousand people, Reform, Conservative, Orthodox and secular.” Ariel-Joel said.

In addition to Oren, an army general who warned of dangers to Israel’s security because of the government’s action; Anat Hoffman, leader of Women of the Wall; Rabbi Donniel Hartman, president of the Hartman Institute; and numerous Reform, Conservative and modern Orthodox leaders all took their turns at the mic.

“Many leaders of the movements I spoke to during the rally were showing mixed feelings,” Ariel-Joel said, “with the great anger, the shame in their government’s actions and the fact that the government and prime minister of Israel deceived them.

“The battle is not about the kotel,” he added, “it is about the soul of Israel.” 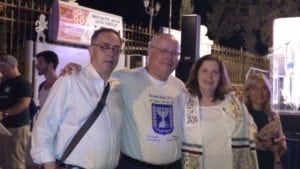 Ariel-Joel also noted several optimistic moments at the rally: “The enormous support our movements are getting from all major Jewish organizations all over the world; the support from Israeli public and from Israeli media; the support from so many leaders and Knesset members; the public support of so many modern Orthodox rabbis and leaders is all overwhelming.”

The decision to suspend the Kotel agreement came at the same time a week ago as the cabinet decided to support a bill that would vest total control of conversions in Israel in the hands of the ultra-Orthodox Chief Rabbinate. The conversion bill has since been put on hold, according to the Union for Reform Judaism.

Two minor religious parties in the government of Prime Minister Benjamin Netanyahu – Shas and United Torah Judaism – pushed for both measures, which would stifle the drive for religious equality in Israel.

Ironically, Ariel-Joel said people at the rally believed the government’s actions have opened a door to those pushing for change. 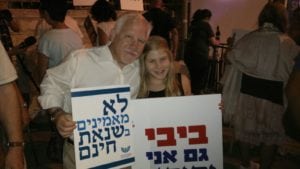 “There is a strong feeling among the leaders I spoke to,” he said, “that this is actually a great opportunity for the Jewish world to unite against those who are trying to divide us, and to show and prove our commitment to Judaism and to the Jewish state by making Israel what it is meant to be – a state for all Jews.

JTomorrow! continues to drive meaningful progress as the path to a new J for the Louisville community is charted. Important milestones have been achieved along the way with much more work to be done. Recently, the community was invited to …

The North Carolina state legislature passed a bill that would bar the state from doing business with companies that boycott Israel. The bill passed last week by both houses of the General Assembly has been sent to state Gov. Roy …