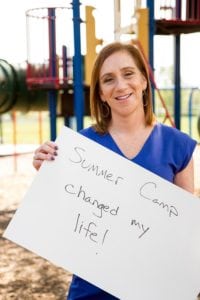 Sara and I have been friends for years, and it all started when we met at a BBYO convention, and bonded over the fact that we both went to Camp Livingston.  We were close throughout high school, and finally had the opportunity to be counselors together in the summer of 1985.  We were in each other’s weddings, and have maintained our friendship for many years.  Like most Livingston friendships, time and space do not seem to matter.  Camp bonds always keep you close.

Sara was a Livingston camper from 1974-1983.  She became a counselor in 1983, and later served in other various roles at camp, including STEP (CIT) director.  Sara met her husband, Howard at Camp Livingston as well.  He even proposed to her at camp!

Growing up in Louisville, KY with a much older brother, for most of her life, she was the only child in the house.  Camp Livingston gave her independence, and taught her how to live with and get along with other people.  She says that camp “shaped who I am, and how I interact with other people.”

Sara says that camp taught her the joy of running – which she still does today.  She recalls that she and one of her bunkmates, Maya Lieberman, did not want to do group sports on the A-Field, so they asked if they could just run around the A-Field instead of participating.  They allowed her to do this, and she is still a runner today.

One of Sara’s favorite things at camp was Maccabiah (she won as Captain).  She stressed that when she was on staff she always remembered the importance of giving kids special things to do to help them build memories, and give them stories to tell.  She credits camp with helping her to choose her career as well.  She says that being a counselor at Livingston was formative in who she became.  It taught her responsibility, and it also taught her that she could have a real impact on the lives of teenagers.  She said her favorite summer was the summer that she was STEP Director.

Sara attended Brandeis University, and got her Masters in Jewish Communal Service.  Her early jobs, and volunteer activities included working with teens through BBYO and as a Teen Director.  She and Howard raised their family in Louisville, and Sara has held a variety of positions within various Jewish organizations in that community.  Sara is now the President and CEO of the Jewish Community of Louisville, which encompasses both the JCC and the Jewish Federation.  Sara still sees many of her camp friends and her daughter is a counselor at Livingston again this summer.

Harry “Butch” Schulman is the quintessential dog person. Not only has the retired Air Force lieutenant colonel bred collies for years, he is a licensed judge at American Kennel Club (AKC) shows, certified for the Herding and Working groups, half …

When they least expect it, Tomi Levinson and Lior Sulami, are captivated by what they teach their kids at the J’s Summer Camp. “I read the little kids a book. It’s called The Lion That Loved Strawberries,” Levinson said. …