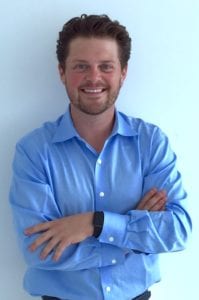 When Aaron Yarmuth first visited Israel with his father in 2007, it wasn’t your typical sightseeing trip.
Most visitors don’t travel the country with a group of U.S. Congress members, and they don’t get to shake hands with two future prime ministers. (Yarmuth met Ehud Olmert and Benjamin Netanyahu.)
“It was an amazing and unique opportunity to experience Israel and meet some of the leaders at that time,” said Yarmuth, a journalist and executive editor of LEO Newsweekly.
That trip stands out in his mind as a red-letter moment in his Jewish identity. It wasn’t his only moment, though.
Yarmuth, son of U.S. Rep. John Yarmuth, grew up playing basketball at the JCC, and he recently sat on a committee that considered moving the future J to the Standard Club site.
Now, he is undertaking his biggest foray into the community to date, co-chairing the organizing committee for The Republic Bank Players Challenge, a golf tournament and one of the biggest annual fundraisers for the Jewish Federation of Louisville and Jewish Family & Career Services.
He is working with Mark Behr, who is in his second stint as co-chair of the event.
Careful not to laud himself too much just for co-chairing a fundraiser, Yarmuth said he decided to take on the task because of the times in which Jews and other minority groups find themselves.
“Granted, this is not necessarily changing the world or taking some grand stand,” Yarmuth said of the tournament, “but this is a moment in time that I feel it’s important to do what you can to support and secure certain groups of people’s positions and safety in society.”
“It was one of those moments,” he said.
An avid golfer with a +1.3 handicap, Yarmuth 37, has played in his share of tournaments. Those experiences have taught him, among other lessons, that event preparation is everything.
“These are not uncommon events, and it’s very easy to make it an unenjoyable day,” Yarmuth said. “When people are asked for money and are taking off time from work or their families, they are eager to play golf, but they want that experience to be enjoyable. If it’s not enjoyable, it’s not likely that they’ll to do it again.”
So his committee is already at work dissecting last year’s tournament, looking for ways to make this year’s run smoother.
“We have looked at last year,” he said, “taking it as a block of wood and started carving at some of the things that didn’t go as well as planned where we would like to see improvements.”
The committee also is looking for ways to speed up the pace of play and make the tournament, from start to finish, more “loud and festive.”
That includes bringing loudspeakers on to the course to play music, Yarmuth said, marking a cultural difference between older golfers and the younger ones the committee hopes to attract.
“That’s something that young people want to get out there on the course,” he said. “It’s more of a party.”
The committee also is looking at doing little things better, like making it easier to get drinks from the drink cart, and “flowing” the golf into the food and the rest of the evening.
“There’s a little bit of a generational shift in golf, and society, that is changing the old way of doing golf events – and golf in general,” Yarmuth said. “It’s integrating cultural trends into leisure golf where I can contribute.”
Behr, who co-chaired last year’s tournament, said Yarmuth, brings just the kind of energy the event needs.
“One of the reasons we brought him on is he’s a lot younger. He’ll provide new insight, give us new direction,” Behr said. “He’s played the game a lot, and he’s been involved in a lot of golf outings, so he’s seen what’s successful and what’s not successful.
He echoed Yarmuth, saying the committee wants to make the tournament more appealing to people who never even grip a golf club.
“We’re really going to try shake things up from last year and, as he said, make it a little louder out there on the course.
He hopes Yarmuth will stay on the committee after this year and co-chair next year’s event.
For now, though, “I enjoy getting to know him and spending the next four or five months with him.”
Yarmuth was 25 when he accompanied his congressman father to Israel. The trip, led by House Majority Leader Steny Hoyer, took the group from one end of the country to the other. Always on the move, the travelers had little time to spend anywhere, especially Tel Aviv, where the younger Yarmuth would have preferred to hang out for a couple days.
But the trip left its mark on him.