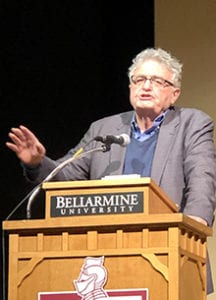 Samuel Kassow describes the impact the Oyneg Shabes had on Jewish history and research of the Holocaust following the screening of “Who Will Write Our History.” (Community photo by Lee Chottiner)

“Jews! Write everything down!”
— Shimon Dubnov, Jewish historian, shouted before his execution in the Riga ghetto, December 1941

During the Holocaust, Eastern European Jews did write everything down.
They wrote on anything from journals to toilet paper.
They also collected posters, newspapers, menus, tickets and poems.
Then they took these writings, rolled them up, placed them in tin boxes and milk cans and buried them in the ground.
This is how Jews, many of whom died before the ghetto uprisings, unable to join partisans in the forests, fought the Nazis – with the truth.
The truth they told was preserved in their buried archives, which were unearthed after the war. The best known of was by a team of writers, researchers, journalists and historians in the Warsaw Ghetto called the Oyneg Shabes.
Their story is told in a film shown at this year’s Louisville Jewish Film Festival, Who Will Write Our History.
More than 200 people crowded into Cralle Theater at Bellarmine University on Feb. 9 to see the film – six years in the making – and to hear from the author whose book inspired it: Samuel Kassow.
“To write was an act of great optimism, because you had to believe the Germans were going to lose the war,” Kassow, a professor of history at Trinity College in Hartford, Connecticut, told the crowd after the screening. “If the Germans won the war, then what was the point?”
By 1942, after much of the Oyneg Shabes Archive was compiled and before the Warsaw Ghetto uprising, the Germans did seem to be winning. They controlled most of Europe, much of North Africa and were at the gates of Leningrad and Stalingrad.
“And yet they wrote,” Kassow said.
Oyneg Shabes was started by a Polish Jewish historian named Emanuel Ringelblum. He organized a 60-member team to document life behind the ghetto walls.
According to Kassow, Ringelblum and his team understood that if they did nothing, the Jewish history of the war would be written by their murderers.
“The Jews saw those film crews; they saw the propaganda posters,” Kassow said. “They knew very well how the Germans would portray them.”
The Oyneg Shabes buried at least three caches before the ghetto was liquidated, approximately 30,000 pages in all, chronicling Jewish life under the harshest of conditions.
At first they collected “stuff,” Kassow said: tickets, menus, candy wrappers, posters.
Then they created 80 different topics to research and document – women, children, religious life, Polish-Jewish relations, to name a few.
Finally, as reports from the death camps seeped into the ghetto, they chronicled accounts of the escapees, some of which reached London and were reported by the BBC.
Only two caches were discovered after the war; a third, believed to be buried beneath the present day Chinese embassy, was never found.
And not all the papers in the other two caches – tin boxes found in 1946, milk cans unearthed in 1950 – survived.
“A lot of water had seeped in, a lot of mold,” Kassow said, “so many documents were spoiled; many photographs were spoiled.”
But because those boxes and cans were recovered, “we have the writings of Ringelblum, the diary of Abraham Lewin (another Oyneg Shabes member),” Kassow said. “We have the writings of one of the great religious thinkers of the 20th century, the Piaseczner Rebbe, of whom many books are being written now.
“We can write about the Jews of the Warsaw Ghetto as individuals, as a community,” he went on. “We can write their intellectual history, their social history. A lot of scholarship has appeared.
“Had the Ringelblum archive never been found,” Kassow added, “those half-million Jews of the Warsaw Ghetto would have been simply nameless, anonymous victims.”
The Oyneg Shabes wasn’t alone. Organized archives were compiled in Lodz, Bialystok and Vilna ghettos. Individuals wrote journals, including a woman in a Krakow death cell who wrote on toilet paper. Her journal has been published by the University of Massachusetts Press (Justyna’s Narrative, by Gusta Davidson Draenger, 1996).
Roberta Grossman, the writer and director of Who Will Write Our History, was originally scheduled attend the screening, but was forced to pull out at the last minute. Still, she and one of the project’s producers, Nancy Spielberg, sister of director Stephen Spielberg, videotaped a greeting to the Louisville audience.
The Goldstein-Leibson Second Century Fund made possible Kassow’s appearance.
Angeline Golden, past chair of the festival committee, opened the program by noting how “fortunate” the city was to bring this film here.
“Those of you who live in Louisville know that it is a very special city that has long promoted interfaith dialogue, tolerance, the arts, history, social
justice and equal rights,” she said. “It’s sometimes a challenge, but Louisville is always seeking the better way.”
Responding to a question from film festival Director Marsha Bornstein, Kassow described the difficulties in making the picture, including fundraising and writing a screenplay without first-person sources.
He said Grossman dramatized the film, using actors reading lines word for word for the journals saved by the archive. Among those actors were Adrien Brody (The Pianist) and Joan Allen (The Bourne Supemacy.)
“No one is alive today who can talk firsthand about the archive,” he said.