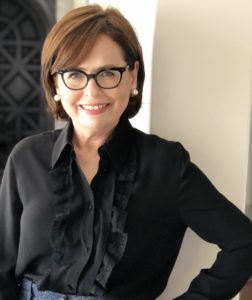 Daughter of Holocaust survivors and a refugee from communist Hungary, Suzi Weiss-Fischmann has learned much from her early days.
She has put that experience to work as the “First Lady of Nails” and co-founder of OPI Products, one of the world’s best-known nail polish companies.
Weiss-Fischmann spoke to the Jewish Federation of Louisville on Sunday, March 14, via Zoom, as part of its Women’s Philanthropy program. Sponsored by Northwestern Mutual and Heaven Hill Brands, the event, hosted by Shane Shaps, president and founder of 520 East Brands, drew 478 people from 14 other Jewish communities.
In 1981, George Schaeffer, Weiss-Fischmann’s brother-in-law, bought OPI, which was then a dental supply company; Weiss-Fischmann joined the business. Schaeffer soon noticed that many nail salons were buying dental acrylics to make their own nails, and Weiss-Fischmann decided there weren’t enough color options for their lacquers. Eventually, they dropped the dental business and went all in on nails.
OPI is now owned by Wella Operations, but Weiss-Fischmann is still its brand ambassador.
Her business success taught her the importance of helping other women get ahead.
“I always try to tell young women, ‘You need to humble yourself,’” she said. “’You need to listen to others and take women on the ride along with you as opposed to pushing them down…. It’s really important as a woman, as a businessperson, that you help others to rise along, and it will pay off every single day.’”
But on this night, she focused on the Federation and her Jewish journey.
Back in Hungary, “I remember, the rabbi would come once a week to teach us to pray, and my mom closing the shades quickly and all the curtains so nobody would see that he came to our house,” she said.
Her father was taken by the secret police several times and the family never knew if he would return. But he did, and they finally secured visas to Israel when she was 10. They eventually reached the United States – her father’s dream.
The term l’dor v’dor (from generation to generation) is especially important to Weiss-Fischmann because of her immigrant experiences. “Even under very difficult circumstances we, as best as we could, observed holidays,” she said, “in Hungary, and certainly when we went to Israel, then experiencing the freedom and being able to be observant, and to have Shabbat dinners with my cousins.”
Fresh from a communist country, she vividly remembers walking into Israeli supermarkets and being amazed by the selection of coffees and chocolates.
“Just to have the choices and the freedom, not only in the supermarket in the foods, but in having friends, being able to go to playdates,” she said, “freely walking to school, walking home, where nobody bothered you or stopped you.”
Weiss-Fischmann recounts her experiences in her 2019 memoir, I’m Not Really a Waitress: How One Woman Took Over the Beauty Industry One Color at a Time. She took the title from one of OPI’s most popular colors, I’m Not Really a Waitress.
Alongside helping other women, the First Lady of Nails added, is helping the Jewish community.
“We all went through so much this year, and the Federation has certainly stepped up and has done tremendous [work] in the different communities, Weiss-Fischmann said. “I’m hoping to be able to give back and help others who are much less fortunate than I am.”

This is the third in a series of photo galleries made possible by the Louisville Jewish Archives Committee. The panel is seeking help from Community readers to identify photos from its collection, which depicts 100 years of Jewish life in …