Pandemic or no pandemic, the 23rd Louisville Jewish Film Festival (LJFF) will happen in February as scheduled.
But it won’t take place in a theater.
Blame COVID-19. Because of the disease that has killed more than 300,000 people nationwide, this film festival will not look like past events: No in-theatre screenings, no post-screening receptions, a totally virtual experience.
“Everything is different,” said LJFF Director Marsha Bornstein.
In addition to the venue change, many of the 11 films slated for pay-per-view screening this year will reflect the theme of diversity, Bornstein said, “because of what is happening in America.”
Several films will touch on Black-Jewish relations:
Shared Legacies, a documentary about Jewish- Black alliances from the founding of the NAACP through the civil rights era; Aulcie, a film about Aulcie Perry, a Black professional basketball player, recruited by Maccabi Tel Aviv, who decided to convert to Judaism; and They Ain’t Ready for Me, a contemporary look at Tamar Manasseh, a Black rabbi whose synagogue is the streets of Chicago. 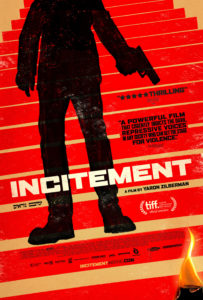 “Incitement,” a cautionary film about what led up to the assassination of Israeli Prime Minister Yitzhak Rabin, is one of the many offerings at the 23rd Louisville Jewish Film Festival.

Other films in the festival also deal with diversity in Israel:
Advocate is the story of an attorney who is Israeli and defends Palestinians in Israeli court; Breaking Bread is a documentary about an Arab food festival in which Jewish and Arab chefs must work together on the dishes, putting aside religious and political differences.
The most controversial film of the festival will surely be Incitement, a “psychological thriller,” according to its liner notes, about Yigal Amir’s evolution from student activist to assassin of Israeli Prime Minister Yitzhak Rabin.
Bornstein shot down any suggestion that the film glorifies Amir. To the contrary, American viewers may see parallels in the film between their experiences and Israelis’ in the 1990s.
“It shows the sickness of the assassin and how he got to this point,” Bornstein said of the film, “and the societal influence that brought him to where he was. Some of this we see in America today.”
Since the festival is virtual this year, an outside contractor, New York-based Elevent, has been signed up to be the platform for the ticketing, streaming and other related activities.
Elevent has stretched itself to offer new services since the onset of the pandemic, serving more than 100 film festivals nationwide.
Its co-founder, Jeremy Wine, said the company shouldn’t even be noticed if it does its job well.
“We’re designed to be forgotten,” he said.
Though it’s the first time – and, Bornstein hopes, the last time – LJFF ever puts on an all-virtual film festival, she left open the possibility that elements of this event are here to stay, even after the festival returns to the cinemas.
Bornstein said she will miss the “buzz” of opening night, the chatter of after-screening receptions as friends share their thoughts on the picture.
“I want to return to the theaters; that would be my hope,” she said. “There is so much to be said for just sitting together in an audience, hearing other people chuckle, staying after with a group to discuss the film. It’s my hope we don’t lose that.”
But Virtual has its advantages.
“It’s wonderful to stay home in your jammies and watch it at your own convenience,” Bornstein said. “You have the advantage of a 72-hour window (with pay-per-view), and we have no conflicts; we’re not dealing with UofL’s schedule – all of that.”

Want to go?
The 23rd Louisville Jewish Film Festival will be held virtually on a pay-per-view basis. For the complete film list and other information, visit jcclouisville.org/FilmFestival.

By Lisa Hornung For Community An outdoor art installation at Bernheim Arboretum and Research Forest celebrates Kentucky women and native plants – the work of an Israeli American woman, a daughter of Hungarian Holocaust survivors. Gabriella Boros, the 2020 artist-in-residence …