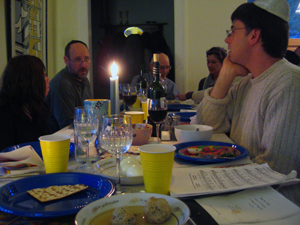 [By Suzanne Kurtz] [Photos thanks to JTA]

WASHINGTON (JTA) — When Stephanie Mattei was dating her husband, Angelo, she knew there was nothing more appropriate to make her South Philadelphia-bred Italian beau for dinner than pasta.

But since it was Passover, and she is Jewish, there was only one option.

“To this day, he still teases me about it!” says Mattei, 37, a psychologist in Havertown, Pa. “To him, it tasted like construction paper put through a shredder and boiled slowly in water. It was less than ideal. And he thought I had no culinary skills.”

In the years since the kosher-for-Passover pasta debacle, the couple, married for 11 years and raising two daughters Jewishly, has learned to navigate a common conflict for many interfaith families: the confluence of Passover and Easter.

Mattei says it’s always stressful when Easter falls during Passover. Her husband’s grandmother has good-naturedly substituted matzah meal for breadcrumbs in the meatballs, she says, “But I know they feel bad and I feel like I am insulting them when I can’t eat the food.”

Such tensions generally  are associated with conflicts surrounding the Christmas and Chanukah season, the so-called “December dilemma.” In fact, several Reform and Conservative rabbis involved in outreach and conversion say they have never been asked about issues that arise regarding the Passover-Easter season.

But Ed Case, president and publisher of the Web site InterfaithFamily.com, an online resource for interfaith families, says the spring season has the potential to remind couples of their differences. Recognizing the conflicts caused by the timing of the two holidays, InterfaithFamily.com began surveying interfaith families six years ago to determine attitudes and behaviors during Passover and Easter.

“The reason we focus on [Passover and Easter] is because it’s an obvious area of conflict,” Case says. “And over the past six years, the survey results have remained consistent.”

Of visitors to InterfaithFamily.com who participated in the 2009 online poll and are raising their children exclusively Jewish, 97 percent were planning on either hosting or attending a seder. Thirty-six percent also were planning to host or attend an Easter dinner.

As with the Mattei family, when Easter falls during Passover, it becomes especially complicated.

Stacey Frank, 37, a teacher in her synagogue’s religious school in New Hope, Pa., says Passover and Easter holiday conflicts were “really not a problem” before she and her husband, John, had their two children — a son, now 10, and a daughter, 8.

Married for 13 years, their home is “strictly Jewish,” Frank says. Her husband’s family, however, is Catholic and “old-school Polish.” Visiting them during Passover has presented many challenges over the years, she says.

“At first I was very inflexible. I brought my own food to my in-laws when it was Passover,” Frank says. “I thought giving in a little would be wrong.

“It was torture,” taking away a candy-filled Easter basket while trying to explain the laws of kashrut to a 3-year-old who only wants to eat a chocolate bunny.

Explaining to children why their family was taking part in an Easter celebration, the InterfaithFamily.com poll found, was an area where non-Jewish and Jewish spouses were not totally on the same page. Non-Jewish spouses tended to cite open-mindedness and tolerance, while Jewish spouses cited a desire not to upset the in-laws.

To better negotiate the issue, Karen Kushner, executive director of the Jewish Welcome Network in San Francisco, suggests interfaith families teach their children about the different holidays early on — and point out both the similarities and differences in religious beliefs.

Even synagogue movements and many Jewish organizations engaged in outreach to intermarried families often draw a line at participating in activities connected to non-Jewish religious observances.

Kushner, whose organization bills itself as a non-denominational operation providing outreach consultation and resources to synagogues, Jewish schools and agencies, says you need to differentiate between family gatherings and church services.

Sometimes she will ask families, If they are leading a Jewish life all-year round, then what’s “corruptive about going to your mother-in-law’s for Easter?”

“Grandparents shouldn’t have to hide who they are and what they believe,” Kushner says, “but they shouldn’t try to convert the [grandchildren] either. Learning to go to other people’s celebrations is completely different from taking the kids to Mass.”
These days, Frank says, she’ll bend on certain issues.

“I realized now it really is only a piece of chocolate,” she says. “If you have a strong Jewish identity, it’s not going to change who you are.”

Before they visit her in-laws for Easter, Frank says her husband explains to the children about the holiday and what his parents believe. If Easter falls during Passover, she reminds the children in advance of a visit, “so they know what to expect” and “there’s no discussion [of what they can or cannot eat] once we’re at [their grandparent’s] house.”

“This way, it’s not confusing for anyone, and it’s also respectful to John and his family,” she says.

Rachel Baruch Yackley, 49, says when her daughter, Rebecca, was little, she had no problem letting her participate in the Easter egg hunt at her “very traditional Catholic” mother-in-law’s home.

Yackley, a freelance journalist and teacher in St. Charles, Ill., says her mother-in-law took pains to respect the Jewish upbringing and education of her granddaughter and recast the girl’s Easter basket as a “Spring basket” devoid of any religious decorations.

“It was wonderful and extremely touching,” Yackley says. “No matter how traditional you are, it can be OK as long as you respect the differences.

“People can get caught up in thinking about matzah and the food, but if you make a space in your family for respecting other people’s belief systems and teach your kids that, it can work.”