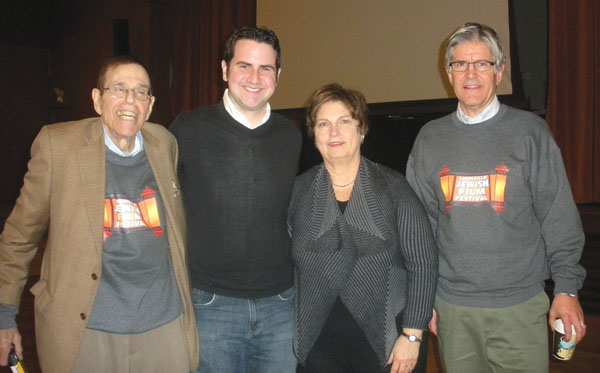 [by Shiela Steinman Wallace and Evelyn and Robert Steinman]

The 14th Annual Louisville Jewish Film Festival will draw to a close this weekend with a double header, Lenin in October and Half a Ton of Bronze to be shown on Saturday, February 25, at Adath Jeshurun at 7:30 p.m. These two Israeli comedies will be followed by a reception, and tickets are just $15.

It should be a wonderful conclusion to the two-week festival, which has brought in nearly a dozen films.

The action began at Adath Jeshurun on Saturday, February 11 with the short “Constant Fire” and the full-length feature Human Resource Manager.

“Constant Fire” explored the conflict between a native Israeli woman and her American-born husband. When Haifa comes under attack, she wants to head south for safety and he is ready to stay and fight.

The short’s filmmaker, Stuart Weinstock was there that evening, and answered questions about the piece, which he made during his second year at film school. He talked briefly about the difficulties of “no budget” filmmaking. Casting problems caused delays in the production, but, Weinstock observed, the delay meant that he had better editing skills by the time his project reached that stage.

Weinstock also presented a free lecture on Comedy as a form of Resistance in Holocaust Cinema and showed clips from The Producers, The Great Dictactor, and Life is Beautiful.

Another highlight of the festival was the sold-out showing of Berlin 36, an emotionally charged film about how Germany used a Jewish high-jumping champion (Gretel Bergmann) to politicize the 1936 Olympic games. The story came to life in a real way, with the in-person appearance of Ann Dorzback and her daughter, Elizabeth Zlotowitz.

Bergmann (now 98 and living in New York) and Dorzback are first cousins and were living in Nazi Germany until the late 1930s. Bergmann was an Olympian contender who unwittingly became a political tool of the Nazis during the ‘36 games. Ultimately, she was denied her rightful place in Olympic stardom by the Nazi hierarchy of the day. She was the pawn used to show the political Americans that Germany would sponsor a Jew in the games – a condition for U.S. participation.

Following the film, Dorzback spoke beautifully to a near packed movie theater. Dorzback, with occasional support from her daughter and artifacts that they brought, answered a stream of questions from the audience that never seemed to be exhausted.

“We were family” said Dorzback, “close family – and we knew what our Jewish life and the demeaning of the Olympics [and Jews] were all about.” The audience was reminded that in 1936, communications were limited. There was no TV nor Internet. So, Bergmann’s story was never widely known. The film was shown in Germany years after the collapse of Nazi Germany. According to Dorzback, it was not possible to judge its impact.

In 1993, Germany named an athletic stadium for Bergmann. She refused to go for the ceremony, although her two sons did.

Asked if she could see a return to the days of such hatred and anti-Semitism, Dorzback’s thoughtful reply was “No! Certainly not in Germany. After all, Germany has no monopoly on meanness and anger. Just look at what is happening in many parts of the world.”

In response to another question she said the most important thing in her life is that people should “Be positive, be optimistic, be forgiving …  we are all in this world to make a difference.”

In addition to the public showings, this year’s Film Festival also included an extra showing of Nicky’s Family at the Village 8 Theaters just for middle school students from Adath Jeshurun, Temple Shalom, Keneseth Israel and The Temple. The film told the story of a British stockbroker who found himself in Prague during World War II and orchestrated the rescue of 669 Jewish children by sending them to England.
This showing was underwritten by the Hannah Marks Fund.

The Film Festival was funded in part by The Rosa Gladstein Fund of the Jewish Community of Louisville, a Jewish Excellence Grant from Jewish Hospital HealthCare Services, Denis and Judy Hummel, Joan Lerman, Chuck Kaplan and family, the Louis Levy Film and Theatre Arts Fund, Adath Jeshurun Synagogue and The Temple.

The American Jewish Joint Distribution Committee (JDC) is accepting applications for its 2012-13 Jewish Service Corps (JSC) through March 15. JSC is a year-long, paid, professional opportunity for recent college graduates and young professionals to travel overseas and play a …

[by Shiela Steinman Wallace] When Shelley Kahn began work at Jewish Family & Career Services in July 2005, she was hired under a three-year grant from the Retirement Research Foundation in Chicago. She wound up staying for almost seven years, …