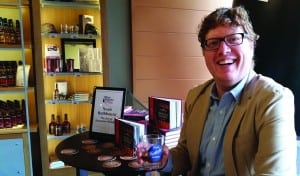 ah Rothbaum sat signing copies of his book The Art of American Whiskey at the Evan Williams Bourbon Experience drinking out of a whiskey glass that said, “Drink Kentucky Bourbon.”

But Rothbaum’s love of whiskey started much longer ago and much farther away from Kentucky.

Rothbaum recalls the days of his youth, attending Shabbat services at his synagogue in New York. There was always a kiddush afterwards, and there would always be whiskey. There was also whiskey at every bar and bat mitzvah and every bris.

Rothbaum became a writer and editor, and developed a love of American whiskey, eventually becoming editor of Liquor.com.

He visited the Evan Williams Bourbon Experience on June 3 to sign and promote his book, The Art of American Whiskey: A Visual History of the Nation’s Most Storied Spirit, Through 100 Iconic Labels (Ten Speed Press, 2015).

The book focuses on the labels and decanters of American whiskey, and throws in some whiskey history and even a few drink recipes from each era he discusses.

He got the idea several years ago when he visited Heaven Hill’s Bourbon Heritage Center in Bardstown, KY, where he saw a display of old bottles and decanters. He became fascinated with the art and design of the old bottles and thought, “That would make a great book!”

So he began doing research and asking for images for the book from various distilleries, and the more he got into it, the more complicated the process became. He started learning all about whiskey history and even historical recipes.

“It was a much bigger project than I expected, and because of that, it’s a better book,” he said.

At one point, he even wondered, “Am I going to be able to pull this off?” But he did, and the book is a beautiful testament to his hard work.

“It was fun to do the research,” he said. Rothbaum originally looked at medicinal whiskey, sold during Prohibition, which he expected to have boring artwork. But he was wrong: The medicinal whiskey had very elaborate art.

“Everybody knew what was going on,” he said of those who pretended the whiskey was actually medicinal.

Rothbaum devoted several pages of the book to the Shapira family, founders and owners of Heaven Hill Distilleries. The Bernheims and Shapiras played an important role in the history of whiskey, he said. “Whiskey has always been an important part of Jewish culture.”

The release of “Jews and Booze: Becoming American in the Age of Prohibition” (New York University Press) in 2014 by Marni Davis, professor at Georgia State University, sparked a new interest in the history of Jews in the whiskey business, Rothbaum said.

Over the years, the quality and variety of whiskey at synagogues has increased, and more distilleries are working on getting kosher labels on their spirits. “They call me, and ask me about how to do it,” he said with a laugh. “I have a lot of whiskey expertise and a little knowledge of kosher.” Though he is Jewish and knows a good bit about kosher laws, he is certainly no expert.

Whiskey is very important to the Jews, he said. Even Whiskey Fest in New York is heavily attended by Orthodox Jews. “They even have a kosher buffet line,” he said.

The Zimmerman Family Summer Fun Fund was established in 2014 in memory of Eddie Zimmerman, a beloved member of our community who spent many summers as a camp counselor at the JCC. Twenty campers have been helped this season thanks …