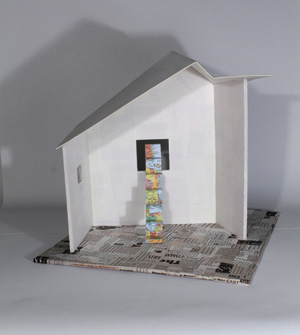 Normally, it’s annoying when someone– especially someone from a different generation–  thinks they can finish what you’ve started.

But for an upcoming exhibition at the Jewish Community Center’s Patio Gallery called “Pairallels,” that’s the point of the entire show.

Curator Stacey Reason is bringing together twenty-two artists, 11 representing artists from the Artists’ Breakfast Group and 11 from a younger collective of artists from the Louisville Artists Syndicate, for the show.

Each of the artists were asked to begin a work with the theme of “Cosmopolitan Localism.” After a set amount of time, the artists turned in their partially-completed work and swapped it out with an anonymous piece from the other group to finish. Only Reason knew the identity of the exchanged artists.

“I was interested in the juxtaposition of these two very different groups of artists and the conversation that happens through collaboration in art-making,” said Reason in a news release.

“When presented with an open-ended statement, how does one artist from one group finish the thought of another artist from the other group? The resulting exhibition is filled with surprises and discoveries only cultivated through such a distinct paring.”

The completed works of art will be on display at the JCC Patio Gallery (3600 Dutchmans Lane) June 16-July 16.