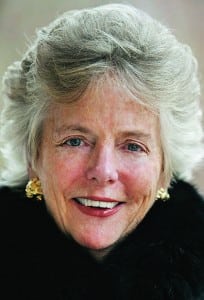 Over the years, the Jewish Community Center’s Blanche B. Ottenheimer Award has come to be known as recognition for individuals whose work for tikkun olam, the repair of the world, has been extensive and sustained and the results have made a difference in Louisville, in Kentucky, and in some cases, even worldwide. Christy Brown, the 2015 Ottenheimer Award winner certainly fits into that category.

Of all her activities, Brown is perhaps best known for her work in the interfaith community. “My faith has always been important to me,” she said. As a Catholic, her marriage to Owsley Brown II, an Episcopalian, sparked her interest.

Starting with the similarities between the two faiths, she began to read about other faiths as well. She found Mahatma Ghandi to be particularly inspiring. “He was an extraordinary thinker,” she said, “who understood the deep commonality among faiths.”

This exploration led her to look for ways people like herself could learn more about one another through their respective faiths. At the time she was working with others to revitalize the Cathedral of the Assumption, so developing interfaith programming and helping establish the Cathedral Heritage Foundation, today the Center for Interfaith Relations, was a natural.

Brown found the work exciting, and as the project grew, she said, “we were making new friends and breaking down barriers. It allowed us to integrate in our community in very different ways. It’s been very rewarding for many of us.”

“We had been doing interfaith programming for many years,” she said, when “Father Martin Lineback said we should put it into festival format.” The group went through the Yellow Pages mailing out a lot of letters inviting a very diverse group to participate in the project. “We thought that if we got 10 responses, we would be lucky, but we got over 40 yesses.”

With such a robust response, the group wound up renting Louisville Gardens for that first festival. Giving each participating house of worship a 10×10 tent to showcase how their faith contributed to the history and how it grew Louisville. The Jewish community participated from the beginning and Roanne Victor was among the founders of the Cathedral Heritage Foundation.

She is also board chair of a new organization, The Institute of Healthy Air, Water and Soil. From this work, Brown and her friends created “the Circle of Harmony and Health, enabling our community for the first time to make health the lens through which all of our community decisions can be made in a healthy manner. From getting out of our places of comfort into places of learning and sharing.” The Circle of Harmony focuses on a variety of interrelated health issues and the integration of resources necessary to support human wellbeing.

Her work with The Berry Center is a natural outgrowth of her interfaith and community work. “I think Wendell Berry is one of the great prophets of the world,” she said. “He is so brilliant and wise and extraordinary.” When the writer’s daughter, Mary Berry, approached her about finding a way to preserve her father’s work, Brown was ready to help. “He is revered around the world,” Brown said. “He is and must become a great source of pride for all.”

The first thing Wendell Berry and his family wanted to do was to have the Berry Center create an academic curriculum focused on sustainable agriculture. The family chose St. Catharine College near Springfield, KY, as the home for this project. It is their hope that this curriculum will be so successful that it will be picked up by many Universities around the world.

Through her work with sustainable agriculture, she came to know Patrick Holden, whom she called a “remarkable leader” who has been instrumental in bringing organic foods to England. Because of his belief that in order to be healthy, we must have healthy food, he founded the Sustainable Food Trust in England, and when he asked Brown to serve on his board, she said yes.

Among her earliest activities in Louisville, Brown volunteered with Senator Thurston Morton with political work and co-chaired Le Boutique de Noel, an early fundraiser for Actors of Theatre Louisville.

Over the years, she has been the owner of Louisville Stoneware, co-chair of Mayor Fischer’s Finance Campaign Committee, the Kentucky delegate to the Stratford Hall Robert E. Lee Memorial Association, and a member of the Governor’s Task Force for Smart Growth.

The Ottenheimer Award is the most recent in a string of community awards she has received over the years. She has also received the Louisville Forum Fleur-de-Lis Award; the Center for Nonprofit Excellence Lifetime Achievement Award; and Greater Louisville Inc’s Gold Cup Award.

She is a member of the Presbyterian Community Center Hall of Fame; was the Today’s Woman Magazine Most Admired Woman Business Owner of 2004; and she received the River Fields, Inc. Land Hero Award; and the Louisville Urban League Meritorious Community Service Award.

Brown received an Honorary Degree of Doctor of Humane Letters from Bellarmine University and is a member of the Junior Achievement Hall of Fame. She received the National Conference of Christians and Jews Award, the City of Louisville Historic Preservation Award, the Cathedral of the Assumption’s Monsignor Michael Bouchet Award, the Kentuckiana Interfaith Community Faith in Community Service Award, the Junior League Founder’s Award and was the 1993 Louisvillian of the Year.

The Brown family business is Brown-Forman.

“Blanche B. Ottenheimer clearly was such an exceptional leader, there is no question that this honor will absolutely inspire me for years and years to come.”

Not so secret confession: I have always been a foodie. One of the first things that made me fall in love with Louisville was being told that we have more restaurants per capita than any other city in the United …