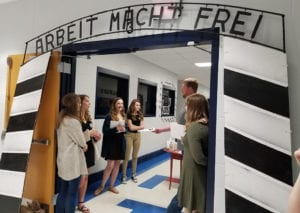 The entrance to the OKH Holocaust Museum included a “Arbeit Macht Frei” sign, (“Work will make you free”). The same slogan was erected over the gateway to Auschwitz. (Photo by Lisa Hornung)

BARDSTOWN – Eighth-graders in Nelson County are learning the lessons of the Holocaust in a first-time curriculum that culminated in creating a Holocaust museum in their school.
Teachers Suzan Sanders and Taylor Bumgardner of Old Kentucky Home Middle School (OKH) collaborate on three English language arts classes and often speak to each other on the phone in the evenings about their projects.
Last fall, while discussing how the Holocaust engages students, they came up with a plan. They picked out several books from which the kids could choose to read. By March, those students were preparing to travel to Washington, D.C., where they would visit the United States Holocaust Memorial Museum (USHMM).
When they returned, the 120-member class worked on “passion projects,” alone or in groups, creating exhibits to turn their middle school into a museum  on May 16.
“They have just thrown themselves into this,” Bumgardner said. “They have taken so much ownership over their own learning. I have seen a lot of growth and maturity.
“We have talked a lot about what it means to be reverent, and discussing difficult topics,” she continued. “I have seen so much emotional growth from them, just in their ability to empathize with other people and be able to see things from others’ perspectives.”
Sanders said she doesn’t know of any Jewish students at OKH, and many of her kids have likely never met a Jew. But they now know more about the horrors of the Holocaust than many kids their age.
Once they had their exhibit ideas in place, they pitched them “Shark Tank”-style to a group of adults from the district office. The “sharks,” Bumgardner said, questioned the kids, trying to poke holes in their ideas and challenging them to find more ways to tell the story.
Sanders said the project made a difference in the students.
“I’ve never in my teaching career had students get so passionate about anything that we’ve done before,” she said. “It’s been emotional, but it’s been amazing to see them rise to it, and rise to the reverence that’s required of something like this.”
During the day, students from lower grades and from another middle school visited the museum. The eighth-graders stood by their exhibits, talking about their work and explaining why they chose their particular projects. They even taught the younger children about the Holocaust.
In the evening, parents and other Nelson County residents came to see what the students had accomplished. In all, a few hundred visitors saw the exhibit, Sanders estimated.
One student, Jakasia Durham, cooked food that was similar to what concentration camp prisoners would have eaten – “black bread” and watery soup made of potatoes and rutabagas.
“It was very unappetizing,” she said. “They (the prisoners) didn’t eat much, and they worked all day, so they lost pretty much all that. And they lost extra pounds. Many died from this.”
Another student, Hailey Ballard, created a three-tier barrack bed similar to what prisoners would have slept in.
“I just saw a picture of it, and it really affected me that people would actually sleep in this,” she said. “I wanted to see how this actually happened.”
Visiting the USHMM only re-enforced for Ballard how people should – and should not – be treated.
“No one should be treated like this,” she said.
Eighth graders Colby Farley and Cameron Turner created a podcast titled “Black and White,” which focuses on Hitler’s early life and how it affected his views and methods. But they are also addressing the way that the Holocaust is affecting the world today and what it means for modern race issues.
“It’s given me a lot of insight, and it’s given me a better understanding of the word ‘reverence’ and how that affects us and some of the things that went on during the Holocaust,” Turner said. “It helps me see how lucky I am, and how we don’t want to repeat that in our history.”
Farley and Turner’s project is one that has made Bumgardner particularly proud.
“They’re two 14-year-old guys who have decided to discuss racism issues in modern day America. I’m so impressed with them,” she said.
The museum project came one year after the Kentucky Legislature passed the Ann Klein and Fred Gross Holocaust Education Act, officially mandating instruction of the Holocaust and other acts of genocide in the state’s public schools.
But Bumgardner said the new law was not a factor in the school’s decision to do this project.
“Holocaust education is vitally important,” she said. [I] hope this law will prompt other classrooms to take up similar initiatives and encourage this type of project.”
Lacking dedicated space, OKH has dismantled the exhibit and is packing it away. But Bumgardner said the school plans to put it up again next year.
“Our ultimate goal is to make the museum project one that eighth graders look forward to taking part in and becomes something we build on and grow from year to year.”