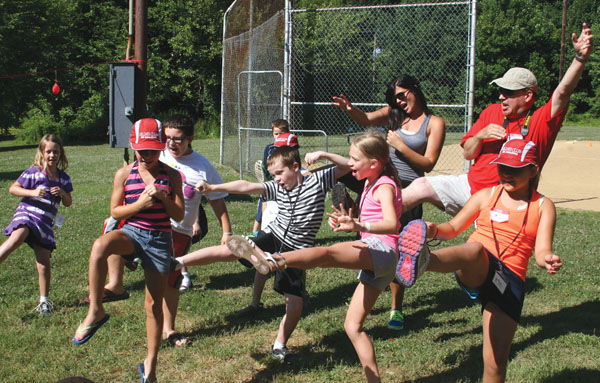 From June 25-29, the National Council of Jewish Women (NCJW), Louisville Section sponsored a summer camp for Gilda’s Club of Louisville. Camp Gilda is for children with a cancer-connection. The camp helped children, ages 6-11, develop skills for dealing with cancer while also having a lot of fun.

“It is singly the most popular event with our youth membership,” said Jenn Morris, volunteer manager of the Louisville Club. “NCJW members are among the volunteers helping on the project.”

According to Judy Shapira, NCJW chair for the program, “The summer camp has had yet another successful year with many NCJW volunteers coming out to help. There were 35 children involved this year and they enjoyed taking part in the activities throughout the week.” Shapira, a founding member of Gilda’s Club of Louisville, worked with the NCJW and Gilda’s Club to form the camp five years ago. Each year, NCJW, which works with many charitable organizations in the community, sends many volunteers to assist with the camp.

“Be Amazing is … our theme, “ said Gilda’s Club CEO Karen Morrison. “We teach kids that nobody really wants to live with cancer, but it’s their choice how they want to live with it. Choosing to live with style and courage is their choice.”
This year, Camp Gilda also took on the theme of the television show, The Amazing Race. Much like in the everyday lives of these cancer-connected children, many roadblocks pop up and detours are taken on the show.

Each day the camp started with breakfast and music to get the kids moving. On Monday, the camp began with icebreakers, and campers split into three groups that they would be with all week. Within these small groups, they shared their own cancer stories with each other and formed team identities by choosing team names, cheers, and posters.

That day, they took a field trip to Baptist Hospital East for a Cancer 101 course, including a tour of chemo and radiation centers and an “Ask the Doctor” panel where they could get answers to cancer-related questions.

The Amazing Race theme really came into play on Tuesday when campers visited the Louisville Zoo and went on a scavenger hunt for clues with their groups. They also visited the zoo hospital where they learned how sick animals are treated, and played in the water park, mixing an educational experience with pure fun.

Wednesday brought the children to Cherokee Park for a day around the world. Stations were set up at the park with activities related to different countries. Thursday began with campers highly involved in the planning process for a carnival to occur the next day. Working alongside the volunteers, they made posters, set up carnival games and much more. The day finished with bowling and the movie, Brave.

The end of the week came with a long-anticipated carnival. During the event, campers had time to play, but also worked half the time in booths helping to raise money. At the end of the program, campers chose to donate the money they raised to Kosair Charities.

“It was a full week that truly impacted the lives of campers and volunteers in many positive ways,” said Morris. “None of it would have been possible without the commitment of NCJW members and their belief in the power of bringing youth together for this kind of support.”

Gilda’s Club, founded in 1991 by Joanna Bull, Gilda Radner’s cancer psychotherapist, and many of her friends, provides a widespread and supportive community for those touched by cancer worldwide. The organization opened its doors in Louisville in 2007 and has continued to be a place for families to come together and share their own journeys through cancer.

[by Phyllis Shaikun] For many of the 31 years that Barbara Myerson Katz and her husband, pediatrician Dr. David Katz, have lived in Louisville, her’s has been a familiar face to audiences at CenterStage, the theater company directed by John …

Attention Teens, Grades 9-12! Join us August 17-19, for a weekend of camping fun at the great Camp Livingston in beautiful, Southeast, Indiana. Weekend highlights include such fun activities as pool and lake swimming, a low ropes challenge course, Havdalah …

[by Justin Sadle] When I began working with BBYO three years ago, I knew that staffing the March of the Living was something I had to do during my time with the organization. Holocaust education has always been extremely important …