He will be remembered as a broadcasting pioneer In Louisville, the voice behind the long-running talk show Metz Here on WHAS Radio, and a man who insisted on civility when he was behind his microphone.

But Milton Metz, who died Thursday, Jan. 12, at age 95, had an influence that traveled far beyond the airwaves.

Metz will long be remembered for his communal service, particularly in Louisville’s Jewish community where he was an active volunteer. 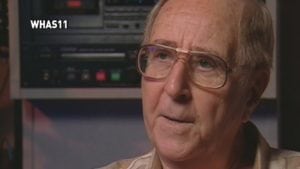 Rabbi Gaylia Rooks of The Temple, where Metz and his wife Miriam belonged, recalled Metz’s work with her on The Crusade for Children telethon to support special needs children in Kentuckiana. Metz was one of the founders and its emcee.

“His enthusiasm and commitment to this most amazing charity never flagged,” Rooks said. “It was always a joy and an honor to work with him.”

In fact, in all 63 years of the telethon, “he did not miss one,” said Dawn Lee, president of Crusade for Children. “This will be the first crusade ever without Milt Metz. Remarkable.”

Metz’s community activism didn’t stop there. He was a volunteer with Jewish Community Relations Council (JCRC).

“The Jewish community was very important to Milton,” said JCL President and CEO Sara Wagner, a past JCRC director. “He served on the Community Relations Council for many years. Milton was instrumental in many media-related opportunities and concerns quietly behind the scenes. He supported the community as a mentor, volunteer, moderated countless events and political forums and was a lifelong supporter of the annual campaign.”

Age didn’t slow Metz down, even after retirement.

“At Temple, even in the last few decades, Milton and Mimi were always involved, participating in services, programs and fundraising,” Rooks said. “He was especially helpful in narrating and producing The Temple’s 150th anniversary video in 1993.

“Milton was a local celebrity who always gave of his time and talent to so many causes,” she added. “He was involved in reading books for the blind and every righteous cause in which he felt he could make a difference. His death is a loss to us all.”

Rooks’ colleague, Rabbi David Ariel-Joel, recalled a less-public side to Metz. He saw firsthand his devotion to his wife, even after she developed Alzheimer’s disease.

Metz’s son, Perry Metz, said his father’s devotion to his mother definitely made her final years worth living.

“It gave her a better quality of life,” Perry said. “While she didn’t remember day to day, she enjoyed her rides, going out to eat and the movies in a way that prolonged her ability to enjoy things.”

Metz began his broadcasting career in Cleveland — his hometown — following graduation from The Ohio State University.

One of the best known on-air personalities in Kentucky and southern Indiana, Metz began Metz Here on WHAS in 1959. The show became the longest running program in Louisville (34 years) and one of the oldest in the country.

That was no small accomplishment, said Perry, who also works in broadcasting. “It’s harder and harder to maintain the popularity of a program over time. It takes a lot to remain relevant.”

As far as his father was concerned, Metz Here was never about him, it was about his listeners, and what they were thinking.

“People could listen for many years and not know what his views were on subjects,” Perry said.

For nine years, Metz also co-hosted and co-produced the WHAS-TV show Omelet, a talk and interview program. He also was the channel 11 weatherman for 19 years.

On the air, was “a voice of reason,” Perry said, “a good listener, and well-read across a wide variety of topics, someone who was interested in the long term welfare of Louisville, KY.”

A 1989 inductee into the Kentucky Journalism Hall of Fame, Metz also received a Ford Foundation grant to the United Nations to work in radio, television and film. He also won top radio award from the American Psychiatric Association.

No wonder he was a sought-after emcee at Jewish events for years – offers that he rarely turned down, according to Perry.

A memorial service for Metz will be held Sunday, Jan. 22, at The Temple.

“Milt identified very strongly with the Jewish community of Louisville and beyond,” Perry said. “He felt very strongly about Jewish values and how they should be expressed in everyday life and community.”

Set in the opulent world of Broadway’s early years, CenterStage’s Funny Girl, presented by Platinum Travel and Lions of Judah, and tells the story of famed comedienne, Fanny Brice. She clowns her way up and through vaudeville, on her way …

Super Sunday volunteers make a difference — Wahba One thing Leon Wahba has noticed since he first started calling people for the Jewish Federation of Louisville’s Sunday: Things haven’t changed much. The volunteers still show up around 9 a.m. on a …

President Donald Trump promised to put “America first” in his inaugural address, pledging to prevent other countries from taking advantage of the United States and to return control of the country to its people. Taking office at noon Friday following …