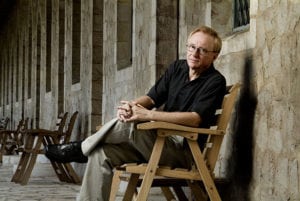 The event, the third annual Jewish Heritage Fund for Excellence presentation, is free to the public and includes a book signing after the Q & A.

Born in Jerusalem in 1954, Grossman is considered a leading Israeli writer of his generation. He has been called a “secular prophet” by George Packer in the New Yorker and his fiction and journalism have been translated into more than 35 languages. He is the author of eight novels and two journalistic books addressing the lives of Israel’s Arab minority and that of Palestinians in the West Bank.

Grossman’s novel See Under: Love is considered a masterpiece of Holocaust literature. To the End of the Land was proclaimed a searing anti-war novel, appearing on over a dozen lists of top 10 books of 2010.

“He weaves the essences of private life into the tapestry of history with deliberate and delicate skill,” wrote Colm Toibin in The New York Times. “He has created a panorama of breathtaking emotional force, a masterpiece of pacing, of dedicated storytelling, with his characters whose lives are etched with extraordinary, vivid detail.

After his son was killed in the Second Lebanon War, Grossman transformed his private grief into redemptive art for Falling Out of Time. A tapestry of poetry, drama and prose, the book is set in a strangely timeless landscape filled with wandering characters struggling to cope with the unbearable loss of their children.

His latest novel, A Horse Walks into a Bar, is set in a comedy club in a small Israeli town where an audience awaits an evening of amusement. Instead, it witnesses the comedian’s personal hell. Ultimately, the book addresses human suffering, society, truth and love – all of the aspects of the human condition.

In his public appearances, Grossman’s words have also transformed the way audiences view the world, and perhaps even themselves.

Ranen Omer-Sherman, the JHFE-endowed chair in Judaic Studies at the University of Louisville, hosted Grossman at a large community event in Miami several years ago.

“He is an absolutely captivating and genuinely warm speaker,” Omer-Sherman said. “During a time of growing unease and uncertainty, both here and in Israel, David Grossman’s humanity and thoughtfulness will be especially appreciated.”

As we begin 2017, we are faced with an increasingly violent world. For KentuckyOne Health and Jewish Hospital, committed to bringing healing, not only within the walls of our hospital, but out into our community, this means dedicating ourselves to …

Just a few weeks ago, I was asked by a reporter how I felt about a “so called” religious freedom law that is currently under consideration in Frankfort.  This law, which mirrors similar laws throughout the country, proposes to provide …

Les Abramson was at his cousin’s house in September 2015 searching for a light switch in the dark when he tumbled down the stairs. “If I close my eyes, I can still think about that sensation of flying through the …