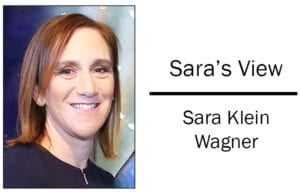 (Editor’s note: Due to a production error, a past column by Sara Klein Wagner was printed in the March 22 edition of Community instead of her latest piece. The correct column is posted below. Community regrets the error.)

Less than a year ago Gia Blum, a senior at Atherton High School and J camp counselor, participated with a group of five Louisvillians on the annual March of the Living.
Gia spent a week in Poland and a week in Israel. Those two weeks inspired Gia to change her plans for after high school, deferring her first year of college to spend a year in the Jewish state.
“Gia was curious and inspired during her time in Israel and started asking questions about further opportunities early into our trip,” said Kari Semel, former teen director at The J. “I also took a gap year in Israel at Gia’s age, so it’s been incredible being a part of her experience.”

According to Gia, her Israel experience has been just that – incredible. She recently sent me an update on what she is doing there. I thought you would enjoy reading it. Here it is:
“Living in Israel has been nothing that I’ve imagined, but perfect in every way. For four months I lived in Jerusalem, where I spent my time visiting the most amazing sites and meeting people from every religion and culture. From the Kotel, to the Holy Church of the Sepulchre, to Temple Mount, I learned more and more about people, and more and more about what it means to be Jewish.
“In January, I moved to Tel Aviv, where I started volunteering for Magen David Adom, the national ambulance service in Israel. It’s given me the opportunity to do something that matters and help people that really need it.
“The decision to live on the other side of the world for a year wasn’t an easy one to make; it meant leaving behind the people, the culture and the language that I knew, but there’s no doubt in my mind that I made the right decision.
My experience in Israel has been so rich and taught me so much about the world. I’m coming out of this year Stronger, happier and more connected to my Judaism than I ever was before.”