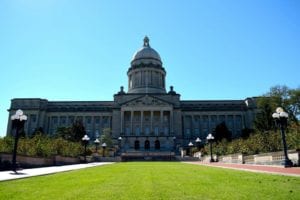 The Kentucky House did not vote on the fetal heartbeat bill, as expected, Thursday. Louisville Jewish organizations have opposed the measure.

(Editor’s note: This is a developing story. Check back with Community for updates.)

In an unexpected development, the Kentucky House of Representatives failed to take up the so-called fetal heartbeat bill on Thursday.
The controversial anti-abortion legislation, which would be one of the most restrictive measures in the nation, passed the Senate on Feb.14 by a 31-6 vote and was expected to easily pass the House. The ACLU has promised a court challenge.
The House reconvenes on Tuesday.
The bill would require doctors who perform abortions to first check for a fetal heartbeat, preventing them from performing the procedure if one is detected.
It would provide exceptions for medical emergencies, though proper documentation would be required.
A fetal heartbeat can be detected as early as six weeks into a pregnancy – a time when many women don’t even know they are pregnant.
Further, the bill would permit a woman to sue for the “wrongful death of her unborn child.”
Louisville Jewish organizations have lined up in opposition to the legislation.
“We believe reproductive health decisions are best made by individuals in consultation with their families and health care professionals based on personal religious beliefs,” according to a prepared statement from the Jewish Community of Louisville. “We strongly oppose any limitation on a woman’s right to fully exercise her constitutionally protected reproductive rights.”
NCJW Louisville Executive Director Jeanne Freibert called the bill “an abhorrent affront to women’s rights to govern their own bodies.”
Attorney General Andy Beshear says the bill is “unconstitutional.”
In a Jan. 31 letter to Senate President Robert Stivers II and Speaker of the House David Osborne, Beshear said the U.S. Supreme Court has ruled in eight separate decisions that abortions cannot be banned before viability and that a woman’s right to an abortion is protected under the Due Process Clause of the 14th Amendment.
He cited the case law, in detail, to support his position.
ACLU-Kentucky Spokesperson Amber Duke called the bill “amongst the most extreme anti-abortion legislation in the country,” which she said will “trigger and immediate challenge.”
It’s not the only bill of its kind. The Tennessee House of Representatives passed a fetal heartbeat bill on Thursday on a 65-21 vote. It now goes to the Senate.
In Ohio, the legislature passed its own heartbeat bill in December, but outgoing Gov. John Kasich vetoed it and a Senate attempt to override failed by one vote. The bill has since been reintroduced and the new governor, Mike DeWine, has said he would sign it.
Similar legislation been passed in Iowa and North Dakota. Neither law survived a court challenge.
Other bills are pending in Missouri and Georgia.
Rep. Mary Lou Marzian, D-Louisville, who has sponsored three amendments to the bill in the Kentucky House, couldn’t say why the bill wasn’t brought up Thursday.
“They love to pass unconstitutional stuff all the time,” she said.