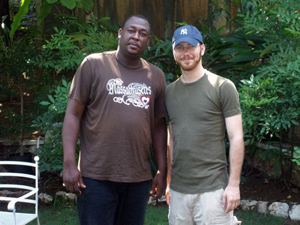 The news about the earthquake in Haiti has been broadcast around the world, but many are unaware that a young Jewish Louisvillian named Jonathan Katz was the first reporter on the scene when the tragedy struck. According to his parents, Barbara Meyerson Katz and Dr. David Katz, Jonathan has been the Associated Press’ Haiti correspondent and the only full-time American journalist working in that country for the past two years.

On Tuesday, January 12, Katz was sitting on his bed at home in Port-au-Prince surfing the Internet when he noticed silence, followed by a weird groaning noise that sounded eerily like an earthquake. The 7.0 magnitude quake turned out to be one of the worst in world history, killing an estimated 200,000 people and injuring over 250,000 with 1.5 million left homeless. Katz was among them.

That evening, he and his housemate, AP driver/translator Evens Sanon, made their way around the shattered city well into the next morning, producing vivid descriptions of “a city tumbled down and a people stunned by the carnage.” Katz found someone with an American Blackberry and filed the story without a byline.

Meanwhile, Katz’ Louisville family had been trying unsuccessfully to reach him to find out if he was OK. When his mother and sister, Rebecca, saw the story, they called the Caribbean Bureau and were assured he was well.

At the same time, Sanon continued working with Katz, unaware that his own home had collapsed, his stepfather had been killed and his stepsister had been severely injured and was trapped in the wreckage. He didn’t even know his baby daughter was safe.

The AP’s Erin Vanderberg says Katz reported the news non-stop over the next few days, working with the Latin American regional desk in Mexico City. 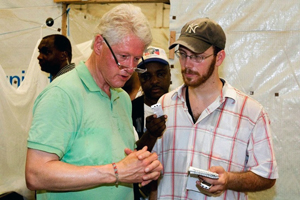 He wrote, “Every flimsy building had caved; the white cloud scratching my lungs hung across the horizon. And the screams were a screeching thunder. The city is a ruin. Fuel, food and water are running in short supply. Mothers have lost their children. Children have lost their families. Entire neighborhoods are sleeping in the streets. People walk miles up and down mountains, carrying everything they own, with no real place to go.

“The tiny bodies of children lay in piles next to the ruins of their collapsed school. People with faces covered by white dust and the blood of open wounds roamed the streets. Frantic doctors wrapped heads and stitched up sliced limbs in a hotel parking lot.”

“For Jonathan the quake was deeply personal on multiple levels,” said his mother. “His house was badly damaged and he has lost friends.” He has kept in daily touch with her either online or by satellite phone, and she was able to get on his Facebook page to let his friends and family know he is well.

The Katzes visited Jonathan in September, and they remember Haiti as a beautiful but fragile country with jaw-dropping poverty. The people are resourceful and use what they can find to eke out a living, but it is hard. The country has no infrastructure, so distributing money and food help is difficult.

Jonathan is now writing “next step” stories with an AP staff of some 20 people on the ground.

Katz and Sanon won the AP’s Beat of the Week $500 prize for their extraordinary reporting efforts during the first week after the quake.