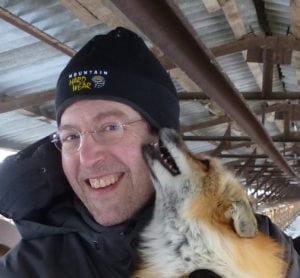 A new book co-authored by Lee Dugatkin of Louisville, How to Tame a Fox and Build a Dog (University of Chicago Press,) has won the prestigious American Association for the Advancement of Science/Subaru “Excellence in Science books” prize.
The New York Times Book Review called the book “sparkling … part science, part Russian fairy tale and part spy thriller.”
The book describes how, for the last six decades, a team of researchers in Siberia has domesticated silver foxes to replay the evolution of the dog in real time.
Dugatkin is a professor and university scholar in the Department of Biology at The University of Louisville. According to his online biography, his main areas of research interest are the evolution of social behavior and the history of science.
His co-author, Russian scientist Lyudmila Trut, 84, has been the lead scientist on the project since 1959.