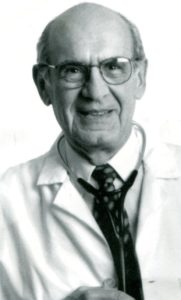 Dr. Albert Goldin, who died earlier this year, loved Yiddish culture so much that his wife, Anita, endowed an annual series at UofL dedicated to its preservation.

Albert Goldin loved Yiddish.
He loved the language; he loved the culture.
He loved the music; he loved the jokes.
He loved all things Mama Loshen-related.
So, when the longtime Louisville physician passed away this year, his family began looking for a way to honor his memory; the answer was pretty obvious.
Anita Goldin, the wife of Albert Goldin and a big booster of the University of Louisville, has made a significant endowment to the Jewish Studies Program at UofL, called the Albert and Anita Goldin Endowment for Yiddish Culture, which will support an annual series of speakers and artists.
The program, which is slated to begin next year and become an annual event, will bring to town scholars, writers, filmmakers and artists – all researching, preserving or modernizing Yiddish culture.
Speaking to Community, Anita Goldin said she wanted to make the gift now, so she, too, could enjoy the series.
She also hopes the series will someday move to a new Jewish studies reading room at the Ekstrom Library of UofL. The university announced a fundraising effort for such a project in 2018.
Ranen Omer-Sherman, the chair of Judaic studies at UofL, is excited about the gift. Up to now, he said, most speakers and programs he’s brought to the campus have been “Hebrew-centric.”
“We’ve had a lot of Israeli writers over the years, some really good scholars on Jewish history,” Omer-Sherman said. “Through all these years, though, we’ve done relatively little on Yiddish per se, and I’m really excited about having a series that will be devoted exclusively to Yiddish culture.”
By no means, he said, is Yiddish today a dusty academic curiosity explored only by aging European professors.
To the contrary, many young artists and scholars are mining Yiddish, unearthing new discoveries, proving the depth and diversity of the language and “producing exciting academic work, and cultural contributions.”
The series will showcase Yiddish art, literature and music.
“Musicians, filmmakers, film historians and different artists that are Yiddish in their [work],” Omer-Sherman said. “Visual artists, why not?”
Albert Goldin, who died on July 28 at age 97, grew up in Lima, Ohio, speaking Yiddish to his mother – an emigrant from what is now Belarus.
In Louisville, when he wasn’t practicing medicine, he literally lived Yiddish culture.
He led a Yiddish speakers club at the Jewish Community Center, founded and played clarinet for the River City Klezmer Band and read the Forward – in Yiddish.
By far, though, his lasting contribution to Yiddish culture was his translation to English of an obscure novel based on the life of Shabbatai Zevi, a false messiah who lived in the Ottoman Empire during the 17th century. Goldin took on the task when he was in his 80s, according to his son, Dr. Harry Goldin.
“He self-published it, but he couldn’t find the author or the author’s descendants, and the publishing house in Tel Aviv had closed,” Harry said. “I think he put advertisements in Yiddish newspapers. He couldn’t find anyone, so he just published it with credit to the person.”
Both Albert and Anita had strong connections to UofL. He graduated from medical school there and did a fellowship. She earned two master’s degrees there – in sociology and social work – and taught in the sociology department.
Together, they audited one course a semester at UofL for at least 30 years.
“I claim that my mother has more credits at the University of Louisville than anyone in the world,” Harry said, “but both of them have a strong relationship to the University of Louisville.”
Omer-Sherman expects the first program in the series to be held after the High Holy Days next year … live.
“We’re going to let it (the endowment) ripen until next October,” he said. “It will probably be our first in-person presentation of 2021.”

By Lee Chottiner Community Editor The show must go on in the Jewish theatre, but David Chack has just given the old saying new meaning for the 21st- century. The ShPIeL Performing Identity, a theater project that has staged several …