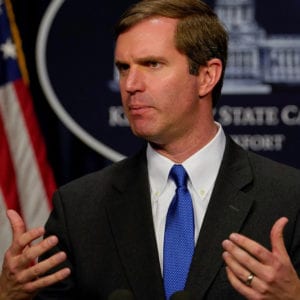 Responding to the revelation that the Kentucky State Police (KSP) once used quotes from Adolf Hitler in a training slide show for its cadets, the number two executive in state government will oversee a reassessment of how the commonwealth trains its law enforcement officers.
In the meantime, the commissioner of the Kentucky State Police has resigned.
J. Michael Brown, executive cabinet secretary, is already reaching out to Kentucky’s police academies, “doing a direct review of training, especially at KSP,” Gov. Andy Beshear said in an exclusive interview with Community.
“We believe he is the right person that will bring not just the knowledge to the job, but also the real-life experience about what a lack of training can result in,” Beshear said.
The governor also promised other changes in education and recruitment designed to make police across the commonwealth more culturally attuned to minorities.
Brown, a former and past state justice and public safety secretary, has already requested that police academies provide all current and past training materials for a full review.
Beshear also pledged that Kentucky’s Jewish leaders will be involved in the process to review and propose training resources for police cadets, state and local, preventing future blind spots that offend minorities.
“We’re going to be developing the training that we know is necessary immediately,” said the governor. “That is the type of training we’re going to look for – an evaluation from the Jewish community and other community leaders.”
Student journalists from Louisville’s duPont Manual High School were the first to report on Friday, Oct. 30, that a slideshow used by KSP to train cadets contained quotes from Hitler, encouraging the future officers to become “ruthless killers.” The quotes came from Mein Kampf and other sources.
Sara Klein Wagner, president and CEO of the Jewish Community of Louisville (JCL), said Beshear reached out to the Jewish community after news of the quotes surfaced. The governor also signaled he was eager to meet with the commonwealth’s Jewish leaders via Zoom, which happened the Monday following the duPont Manual report came out.
“He agreed to have a larger conversation with the leaders of the Jewish community, which I think was a wonderful first step,” Wagner said, “and we are all looking forward to partnering with the governor and his office.”
Initially, Beshear said the presentation was used once, in 2013, and that the individual who prepared it is no longer with KSP. But the governor later  announced at a press conference that a second PowerPoint had been discovered.
He said he was “horrified and furious” when he first learned the news.
“I found out about this through social media, which is also unacceptable,” he said. “There is no excuse and no reason it (the quotes) should ever have been in any training material. Period.”
Beshear criticized the KSP’s initial response to the news, which he said “should have been that this is not acceptable training material [and] we’re going to immediately find out when and how it was used and we’re going to take appropriate corrective action.”
Soon thereafter, KSP Commissioner Rodney Brewer announced his resignation. Beshear, who met with reporters the day after speaking to Community, would not say if he asked Brewer to go.
The news comes as Louisville and other Kentucky communities wrestle with giving police the cultural training they need to serve diverse minorities in the commonwealth.
The Black community has long complained of unequal and confrontational treatment by police. The tensions finally erupted this year not long after Louisville officers shot to death Breonna Taylor in her apartment while exercising a no-knock search warrant.
“We’re very concerned with the larger question of training and changing the culture in law enforcement with regard to Jews and other minorities – African-Americans, Muslims,” said Jon Fleischaker, outgoing co-chair of the JCL Board of Directors. “That’s all part and parcel to the same problem.’’
Beshear said that the proposed state budget he will  submit to the General Assembly in January will include funding to recruit more diverse police forces at the state, county and city levels.
Speaking to the Jewish communities here and nationwide, the governor stressed that this incident is not a true reflection of the state.
“This is not who we are in Kentucky,” he said.