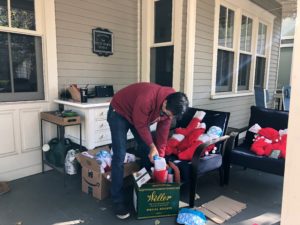 Avery Kolers was one of several JJI members to stuff Christmas stockings for immigrant families in Louisville on Sunday, Nov. 1. (Community photo by Lee Chottiner)

Christmas will come early this year for many Louisville families thanks to a group of local Jews committed to bettering the lives of immigrants and refugees here.
Eight to 10 members of Jews for Justice in Immigration (JJI) gathered in the back yard of the Highlands home of Dr. Ian Mutchnick Sunday, stuffing Christmas stockings with candy, toys and Beanie Babies, which were delivered that week to the LaCasita Center downtown.
The groups also acquired food staples – beans, plantain chips, espresso coffee and coconut milk, and toiletries – towels individually wrapped around soap – all of which also went to LaCasita.
Avery Kolers, a member of JJI, said the group stuffed 98 stockings.
“La Casita was excited about it (the project),” Kolers said, “and the staff and volunteers there provided a great list of Latin American treats that would make people feel at home.”
Susan Rostov, another JJI member, brought the idea for the stocking stuffer to the group after someone she knew rescued several Christmas stockings from a dumpster in Old Louisville.
“I contacted Avery and I asked him if this was anything he’d be interested in, and he said yes,” Rostov said. “That’s how it got started.”
Donations came in for the community. JJI posted an Amazon wish list and a local chapter of Gold Humanism Honor Society, which promotes the human connection with healthcare among medical students, also pitched in.
“They raised a lot of money and bought most of the coffee,” said Sara Gottesman, a medical student at the University of Louisville who took part in the stocking stuffer. “We’re really lucky they helped us out.”
JJI also encouraged donors to purchase items at local groceries that cater to Hispanic customers.
“Buying locally from Hispanic American businesses seemed to me important,” Rostov said. “I saw the stocking project as only one step in welcoming a population who has suffered indignities beyond sane imagination.  The stockings were only one piece of the puzzle.  I saw buying locally as a small step  to help Hispanic American businesses succeed in the COVID crisis.”
Established in 2019, JJI is a loosely organized group of Jewish volunteers, who support immigrant-led interfaith programs in Louisville, making for a more welcoming city, and a more just immigration policy.
The La Casita Center supports Louisville’s Latinx community through education, empowerment, advocacy, and wellness.
Under the heading of strange donations, one of the wish list packages from Amazon that came in contained, juice, candy … and a Husqvarna leaf blower.
Mutchnick said he wasn’t sure if the appliance, which also was offered to LaCasita, was sent by mistake. There was no delivery label.
“I’m pretty sure it wasn’t on the wish list,” he quipped.