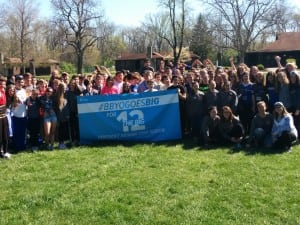 BBYO AIT/MIT Convention
From April 15-17, 25 Louisville BBYO members attended AIT/MIT Convention at Camp Campbell Guard in Hamilton, OH. This convention is designed to give new members a taste of BBYO and to teach them the traditions and rituals of BBYO.

It coincided with 12 other BBYO Conventions taking place around the world. The simultaneous conventions came together via webcam for a song session on Saturday night.

The following Louisville BBYO member served as members of the steering committee for this convention: Carly Schwartz, Ava Schumacher and Zev Meyerowitz.

Why pay all that extra money for off-shore scuba diving on a cruise when your kids can learn to scuba right here at The J Summer Camp? Intro to Scuba is just one of over a dozen specialty camps that …

Celebrate Yom Ha’atzmaut, Israel Independence Day, at The J on Sunday, May 22 with great family activities from art projects and games to cotton candy. The fun starts at noon and continues until 4. Bring your own picnic or purchase …