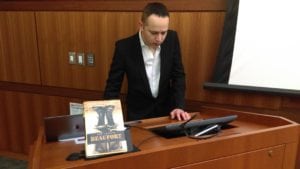 Ron Leshem plays a videotape fr his audience at the Ekstrom Library,a copy of his novel Beaufort, propped on the lectern (photo by Bruce Snyder)

(Editor’s note: This is a corrected version of an earlier story, which includes accurate information about the Naamani Lecture Series.)

He is an award-winning author, screenwriter and one of the top TV producers in Israel. Now, Israeli born Ron Leshem has taken his talents to America.

While his new pilot awaits approval on the AMC cable channel, Leshem has been executive producer of the short-lived NBC spy drama Allegiance.

Yet according to the 41-year-old writer, who spoke Sunday, April 9, in the Ekstrom Library on the University of Louisville campus, what really motivates him is the opposite of success.

“Ninety-nine percent of the time I fail, so it feels to me like a huge endless failure,” Leshem said. “I don’t feel successful. I just feel disappointed almost every day. I don’t want to end in failure so I just keep on writing. I love stories. I love meeting people.”

Leshem, who appeared at U of L as part of the Naamani Memorial Lecture Series, which is supported through an endowment funded by the family of the late professor, explained how creative products from Israel are increasingly finding markets around the world. Stories, dramas and comedies that are created in the Jewish state are often sold to production companies abroad and adapted to fit local audiences.

For example, Leshem showed a clip of a movie he was associated with, The A Word. It’s about an autistic boy who does not talk, but does memorize every song he hears and sings them back. In so doing, Leshem showed how a film put together for Israeli movie-goers can be modified to appeal to audiences in Greece and Great Britain.

“When I started on my first film, all I wanted to do was talk to Israelis,” he said. “I wanted to create bridges when I write; I had no interest going worldwide. 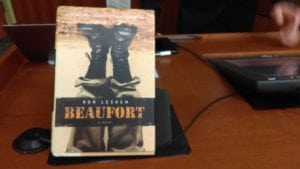 The cover of Leshem’s novel, Beaufort. The acclaimed book, reprinted in several languages, was later made into a motion picture that was nominated for an Academy Award for best foreign language film. (photo by Bruce Snyder)

“But the company I worked for could make more money [selling the rights outside of Israel],” he continued. “It took me years to fall in love with the idea that a show can have audiences all over. I was late to understand it.”

Leshem admitted he is still learning the nuances of the entertainment industry.

The native of Ramat Gan, a city near Tel Aviv, started his career as an Israeli newspaper journalist and senior editor. “Twenty years ago I was a journalist. I miss it a lot, but I was editing every night until 1 a.m., some of the most horrific war stories. I was seeing tons of Israeli and Lebanese bodies.

“I found drama as an escape and a comfort. The good thing about drama is that you are not working alone because unlike a novel when you are writing alone, in drama all of us are working together.”

Leshem knows what he is talking about. Twelve years ago he wrote Beaufort (pronounced Boo-Fore), a novel that looks at war through the eyes of soldiers. It won Israel’s top literary award, spent two years on the country’s best seller’s list, and was ultimately translated into multiple languages, and adapted into a film.

“I lost my uncle in the first Lebanon war,” Leshem later told Community, his voice getting quiet. “For me and my family, we did not talk about it for 18 years. I was trying to see what my mother felt like when she lost her brother, and what it meant living in the skin of these soldiers. It’s about how war ends. For me that was the story.”

Nowadays Leshem goes back and forth between Hollywood and Israel, working on his many entertainment projects.

“I write to escape from myself,” he said. “If I choose something I am passionate about, I can live in my alter ego for several years.”