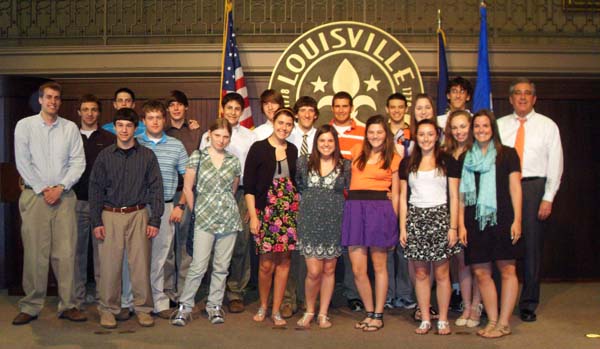 On Thursday, April 15, 20 teens from the Kesher Kentucky program met with Louisville Mayor Jerry Abramson at City Hall, to discuss leadership and how to get involved at a young age. Mayor Abramson quickly captured the teens’ interest as he shared his personal story starting with how he became a leader as a Jewish teen in BBYO and at the JCC. He also challenged his young listeners to take advantage of opportunities presented to them both in the Jewish and general communities.

Mayor Abramson recounted how he got involved in politics as a college volunteer with Robert F. Kennedy’s presidential campaign in 1968, and how the turbulent events of that year – the assassinations of Martin Luther King Jr. and Robert Kennedy – affected him as a young person with a developing interest in politics.


The mayor also discussed leadership skills, pointing out that leadership isn’t just about being in charge, but is about building a consensus and bringing people together for a common cause. He kept the Kesher participants fully engaged for almost an hour, ensuring that the excursion to his office was a special experience for all.

After the session with the mayor, the teens were split up for small group discussions. Each group considered a different real life dilemma like choice and drilling for oil in Alaska and how they might handle it as leaders.

Phil Grossman and Stuart Perelmuter were the guest facilitators for this part of the program.
Having the first session with Mayor Abramson provided the Kesher participants with a unique opportunity to sit in City Hall and have a candid conversation with our Jewish mayor who got his first leadership experiences in the Jewish community, which nurtured and supported him, and paved the way for his later political success.

Kesher Kentucky, a program of the Jewish Community of Louisville, is a leadership program for 10th-11th graders, which culminates in a 10-day trip to Israel in December.

Editor’s note: As an alumnus of the 2000-01 Kesher Kentucky Program, Justin Sadle is excited about serving as director of this year’s program. He was involved in the Kesher committee while serving as an intern at the Jewish Community Federation of Louisville in 2008. This year’s Kesher participants have also traveled to Indiana University to visit that campus’ Hillel and learn about Jewish college life. Upcoming programs include a May 23 session with Marlene Gordon on poverty, and a tentative December-January trip to Israel.