At Jewish Family & Career Services’ Annual Meeting on Tuesday, those in attendance had the opportunity to learn a little bit about a few of the many programs from people involved with them, and to hear about the highlights from the year from JFCS President Stephanie Mutchnick and Executive Director Judy Freundlich Tiell.

JFCS also presented the 2016 Mary Gunther Award and elected Board members and officers for the coming year.

JFCS Stories
Both Jake Latts and Jillian Lustig are teenagers who participated in the Marjorie and Robert Kahn Pledge 13 program. The program enables b’nai mitzvah candidates to design their own mitzvah projects and encourages them to tap into their passions.

Latts’ passion is the performing arts. His love of the arts developed because he had many opportunities for arts experiences when he was young. His commitment to volunteering comes from his parents, Kate and Allan Latts. In fact, Latts remembers helping out at Super Sunday telethons for the Annual Federation Campaign and at JFCS Mitzvah Days.

As he began to prepare for his bar mitzvah, he wanted to do something that would give young people who didn’t have the same opportunities he did an arts experience. He decided the best way to do that was to create a fundraiser for CenterStage’s Acting Out program, which brings professional theater into schools. The funding provides subsidies that enable the company to perform at schools that don’t have the budget to bring arts performances in.

Latts created the Louisville’s Got Talent children’s talent show. Each year since Latts began the project, the competition has drawn over 100 young people to audition for 20 slots. The program has already raised $20,000 for Acting Out and it continues to grow.

Jillian Lustig wanted to do something that makes people happy for her project and she had heard about the Bloom Project in other cities. Lustig solicited donations from local florists, enlisted local nursing home residents to help her make bouquets and delivered the finished products to bedridden patients. She even gave bouquets to Hosparus patients so they would have a gift to give to the staff that cares for them. The project was so successful that she has been asked to come back to several nursing homes.

Evelyn Fiag has been a volunteer in the Doris and Theodore Meyers Shabbos Friends Program since its inception. Each week she goes to the Forum at Brookside and Belmont Village and makes a brief Shabbat celebration for residents. She lights electric candles, saying the appropriate blessing, makes Kiddush with grape juice and leads the Hamotzi, distributing fresh challah to every participant.

Since the program is open to all nursing home residents, she has many non-Jewish participants, giving her the opportunity to share a little bit about Judaism. For some Jewish residents, this program is their only remaining link to Judaism, and all the participants are eager to express their appreciation.

At Passover time, some residents asked her to lead a Passover Seder, too. Having been raised Orthodox, Figa had never led a Seder before, but she rose to the challenge, worked with the kitchen staff to provide appropriate food, and led her first Seder at the Forum. When the chaplain at Brookside heard about it, he asked her to do one there, too. She even presented a program explaining Passover to a Bible study group.

JFCS is all about providing service, and one of their areas of emphasis is the Senior Concierge Program, which offers a spectrum of services designed to let people live as independently as possible for as long as they can. John Rothschild explained that when he first turned to JFCS for help, he and his wife, Renée, only needed a little bit of help. Now, they are in their 90’s and they need a bit more assistance. JFCS has been with them every step of the way.
Drew Kornblum used JFCS’s Career Decision program described how, after finding himself unemployed after working for one company for 16 years, JFCS helped him prepare his resume, master interviewing skills and learn how to take advantage of networking opportunities.

President’s Message
JFCS is a mission-driven organization, JFCS President Stephanie Mutchnick said, and she used her remarks to present statistics that highlight the impact JFCS has in Louisville.

The Senior Concierge service is growing rapidly. In the past year, JFCS provided nearly 24,000 hours of homecare and 2,700 hours of free respite for family members. The number of home aides the agency employs has grown from three to 16.

The Senior PALS program, which provides reliable transportation that enables people to remain independent longer, provided over 5,600 rides to seniors with disabilities, part of which was Joy Ride, a program the provides rides for Jewish seniors to Jewish community events and services.

Through Solutions to Senior Hunger, funded by a grant from MAZON, JFCS has reached 200 seniors, providing them with information about food stamps and assistance in applying for the aid.

JFCS social workers and therapists helped over 1,600 clients and their family deal with life’s challenges – stress, abuse, family conflict, trauma, grief and more. And now all of JFCS’s counselors are credentialed to receive Medicaid payments. The agency is also working to make more services available to non-English speakers.

Through the JFCS Food Pantry and the Sonny and Janet Meyer Family Food Pantry Fund, JFCS provides food to over 140 people each month.

JFCS is strengthening its career management and workforce development services. It has a newly launched supported employment program for people with disabilities and a program that addresses long-term unemployment.

It also has an individual development account program that helps refugees save money to purchase homes or cars for transportation to work, capitalize micro-businesses and pay for post-secondary education, while the Navigate Enterprise Center helps low-income and refugee clients develop the skills needed to launch new businesses and it partners with the Metropolitan Housing Coalition on a community development bank program that funds small business needs.

JFCS also builds community through support groups, skill building workshops and more. JFCS makes a special effort to serve the Jewish community. It has almost 400 volunteers and about 80 percent of them are Jewish.

The agency also sees support from the Jewish community in events like Pizza in the pantry and the Jazz and Jewelry event.

Mutchnick pointed to the success of the MOSAIC Awards to show how JFCS is also engaging the general community.

She said JFCS will continue to expand and strengthen its programs and engage more people. “Together,” she said, we are a community on a mission to strengthen individual, family, work and community life, enhance self-sufficiency and reflect the enduring values of jewish tradition.

Executive Director’s Report
Judy Freundlich Tiell’s report echoed many of the highlights Mutchnick addressed as she highlighted some of the ways JFCS served 9,000 people in the region.

Funding continues to be an issue as JFCS is seeing more people with fewer resources, but, she said, “the level of creativity, commitment and passion exhibited by our Board and staff and volunteers to meet those challenges in unparalleled.

“Our volunteers are amazing,” she continued, “and truly provide services that free up staff for other responsibilities.” Tiell also had words of praise for the JFCS Board and staff.

In addition, Tiell recognized Mary Cleary, who has been with JFCS for 15 years. She is JFCS’ grants and information manager and she runs the agency’s savings programs; and four JFCS staff members marking 25 years: Bonnie Lewis, Janet Poole, Lauren Kehr and Mauri Malka. Lewis works in the finance department; Poole works with career service clients where she handles testing and coordinates classes and workshops; Kehr is a licensed clinical social worker; and Malka leads JFCS’ Family Services, including the Klein Older Adults programs, counseling services and emergency assistance.

All other staff members were recognized.

At large members of the Executive Committee are Mark Ament, Jay Klempner and Marty Margulis. 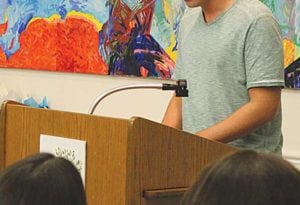 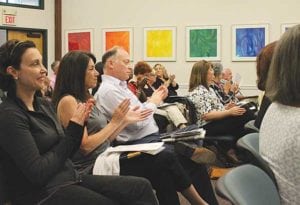 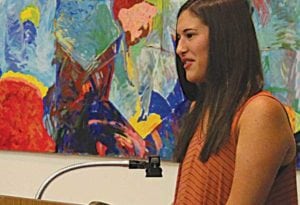 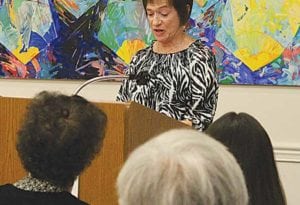 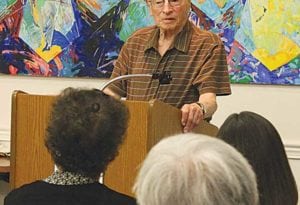 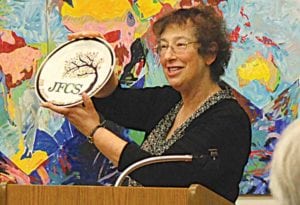 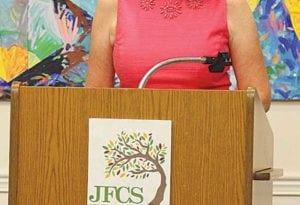 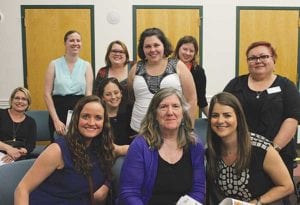 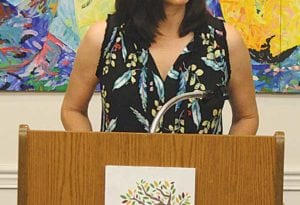