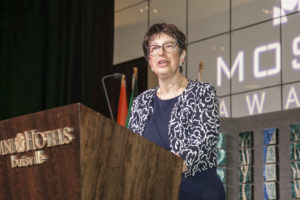 Judy Freundlich Tiell addresses a capacity crowd at this year’s MOSAIC Awards, a major fundraising event for the Jewish Family & Career Services (JFCS). Tiell has been with the agency since 1979. (Photo by Ted Wirth)

Judy Freundlich Tiell will end her service to Jewish Family & Career Services in December when the long-time executive director of the agency retires.
“I joined the staff in 1979 and had been a part of the management team for many years,” Tiell said.
In recognition of her long-standing service and commitment to JFCS, its board of directors has announced the establishment of the Judy Freundlich Tiell Family Strengthening Fund to honor her commitment to providing families parenting skills, economic means and social connection.
Her husband, Bob Tiell, former head of the JFCS Career Services, recalled when the executive director’s position became vacant in 2004.
“I urged Judy to throw her hat into the ring, truly believing that she was much more than a worthy candidate,” he said. “I think time has demonstrated that it was a wise decision.”
Jane Goldstein, former president of Jewish Family & Vocational Service (the predecessor to JFCS), called Tiell “an excellent hire” and lauded her for “positioning JFCS as a vital part of our community,”
“I was privileged to meet Judy when I interviewed her for JFVS in 1979,” Goldstein said. “It was clear then that Judy was a remarkable social worker, committed to the organization’s Jewish values,”
A Brown University graduate, Tiell went on to earn two masters’ degrees: an MSW from the University of Maryland and a Master of Arts in Jewish studies from the Baltimore Hebrew University.
Her social work practice has specialized in areas of adoption, infertility and intermarriage, helping many in the region build families.
Tiell also helped to create programs and services that enable people to develop their skills, manage transitions and move forward in strengthened and positive ways.
As executive director, her vision for JFCS has been that the organization serves the entire community through a Jewish lens and tikkun olam (repairing the world).
She has been instrumental in creating LHOME, a certified community development financial institution, and other financial empowerment programs benefitting individuals and families.
Tiell also has brought her skills and leadership to the Jewish communal field.
“[Judy’s] involvement with the International Association of Jewish Vocational Services and the Association of Jewish Family and Children Agencies helped to define our work for more than a decade,” said Linda Burger, CEO of the Jewish Family Service of Houston, Texas. [Her] leadership helped birth the newly formed Network of Jewish Human Services, an organization that meets the needs of our field today.”
Tiell is proud of her role in starting a local chapter of Resolve, a support group for people dealing with infertility, and the development of numerous support networks within the Jewish community for people dealing with substance abuse, for the LGBT community and for interfaith couples.
She has mentored and coached many young social workers and has created an organizational culture that allows for the growth and development of young professionals.
“Judy has been an exemplary and gifted leader,” said Joe Tolan, former head of Louisville’s Metro United Way. “I consider myself quite fortunate to have had the opportunity to work with her, and I wish her all good things as she embarks on this new stage of her life.”
As a first-generation American, Tiell has been passionate about helping refugees and immigrants find their place in the community. Many JFCS programs that focus on creating pathways for newcomers to move forward in their careers were developed under her leadership. Indeed, since college, she has worked with refugees, helping them with job development and cultural competencies.
“Judy has touched so many people with warmth, understanding and kindness, said Sara Klein Wagner, president and CEO of the Jewish Community of Louisville. “She has helped interfaith couples navigate the start of their lives together with support and understanding. She has worked with young couples adopting children. She has guided substance abusers to the help they need. She has ensured that services and support are available for refugees and immigrants, giving them a fresh start in Louisville.”
Married for 37 years, Judy and Bob have two sons, Scott and Jeff, and their respective partners, Lindsay and Kendra.

(Beverly Bromley is director of development and marketing at JFCS. To contribute to the Judy Freundlich Tiell Family Strengthening Fund, contact Bromley at 502-452-6341, ext. 223, or at bbromley@jfcslouisville.org.)