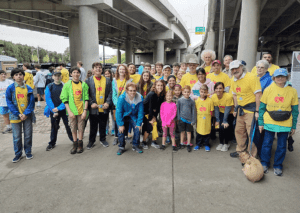 Jewish Louisville participants from the 2018 Dare to Care Hunger Walk pose near the Riverfront, where the event is annually held. This year, Louisville’s Jewish and Muslim communities will come together on the same team to fight food insecurity in the region. (photo provided)

Jewish Louisville will again take part in the annual Dare to Care Hunger Walk. Only this year, they will have company.
This year, Jewish – and Muslim – Louisvillians will walk together, on the same team.
The joint-team, called the Muslim-Jewish Alliance for Hunger Relief, is part of a new effort in Louisville called the Muslim-Jewish Advocacy Council, which will be rolled out this fall, bringing the communities together to advocate for issues on which they find common ground.
According to Matt Goldberg, director of the Jewish Community Relations Council, organizers from both communities thought the Sept. 22 Hunger Walk would be a good venue to strengthen their relationship.
“We knew it would be a perfect way to show our commonalities,” Goldberg said, “and one of those commonalities is our city, and food insecurity in the area.”
He said one in six people in Kentuckiana is food insecure, “meaning they don’t know where their next meal is coming from.”
Among children, the ratio is one in five.
The Muslim-Jewish Advocacy Council, which is being organized under the auspices of the American Jewish Committee, will tackle issues such as religious discrimination, hate crime awareness and workplace bias.
Dr. Muhammad Babar, a physician, past board member of Interfaith Paths to Peace and an active member of the Pakastani American community in Louisville, is co-organizing the alliance with Goldberg.
The Jewish-Muslim collaboration won’t be the only Jewish team in the walk. Keneseth Israel will again enter its own team in the event. The Temple will join the collaborative team.
The 41st Hunger Walk will take place at 2:15 p.m. at Waterfront Park’s Harbor Lawn, 231 Witherspoon St. This year, a new two-mile course will stretch along the Ohio River. Proceeds raised by the walkers will support the Dare to Care Food Bank, the mission of which is to end hunger in the community.
The goal for this year’s event is $75,000.
The walk is part of a family festival that will run from noon to 4 p.m.

Want to walk?
To sign up for this year’s Hunger Walk, visit www.thehungerwalk.org and join the team.