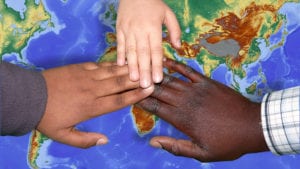 As the Trump administration steps up efforts to find and deport undocumented immigrants, the effects of the crackdown are being felt in Louisville.
The Jewish Family & Career Services says many of its clients – all here legally, to JFCS’s knowledge – are experiencing an uptick in fear and anxiety.
“I’ve received a lot of questions about is it safe for me to go to the grocery store, is it safe for my children to go to school,” said Kristina Mielke, career & employment specialist for Louisville’s refugee population.
Even though they have legal status, Mielke said her clients are scared that it could be taken away from them at any time. “So they just want to know if it’s safe for them to be outside of their homes.”
Mielke works with 117 clients, who come from places as far-flung as Africa, the Middle East, and the Caribbean.
Though their lands of origin vary, they are experiencing the same anxiety.
“An Iraqi talked about whether his kids should go to school, an African from DRC (Democratic Republic of Congo) asked it was safe to go to the library, the post office or Kroger. Cuban clients are asking what documents they should bring with them to prove who they are if ICE stops them.”
ICE stands for Immigration and Customs Enforcement, the federal agency under the Department of Homeland Security responsible for immigration law enforcement. Last month, President Trump ordered an ICE deportation operation in 10 cities, seeking as many as 2,000 undocumented immigrants, according to news reports.
According to Mielke, some of her clients are changing their habits as a result of the crackdown.
“Instead of going on vacation or going to a third country in order to visit with family, they’re changing their free-time habits,” she said, “making sure that they stay within the country, not wanting to leave because they are scared that if they left, then they wouldn’t be allowed back in.”
Mauri Malka, JFCS director family services, said the agency is arranging counseling for clients if they need it. It also is trying to answer all questions and provide good information about their status, visas and travel.
She said refugees are susceptible to the psychological effects of the crackdown no matter how long they have been here.
“It almost doesn’t matter how long they’ve been here, there can still be psychological consequences,” Malka said. “We resettled refugees 25 to 30 years ago, when I first came. I would anticipate that some of them – people who came here for fear of persecution – when there’s something like this, it triggers those same kinds of feelings and it can bring it right back.
“That’s when we refer to PTSD,” she added, “those triggering events that can take you back into the moment.”
PTSD stands for post-traumatic stress syndrome – a mental health condition that’s triggered by a terrifying event — either experiencing it or witnessing it, according to the Mayo Clinic. Symptoms may include flashbacks, nightmares and severe anxiety, as well as uncontrollable thoughts about the event.
Malke said the services and treatment JFCS can provided are focused on giving clients a sense of control over their lives.
“A lot of what happened has taken the locus of control away from them,” she said, “so we’re trying to put them in the center of that control. It’s hard for us to imagine, not having experienced that kind of fear and knowing when your life is in danger or not.”
But others can imagine it.
Refugees who came to America in other times, including Holocaust survivors, can experience the same kind of anxiety as the latest newcomers. Malke said she is checking in with survivors the JFCS works with to see how they are handling the latest news.
One survivor, Fred Gross, said there are definite parallels between their experience and the current crackdown.
“Absolutely, especially fear,” Gross said, “the fear of being arrested and being sent back.
“My parents felt that way,” he continued. “I was a kid, so I didn’t know what was going on, but I felt it through my parents. They were afraid… They were always guarded and kept to themselves.”
When Gross became a teenager, he manifested that same fear within himself, especially when his classmates tried to befriend him.
“I guarded myself against that because I feared being harmed,” Gross said. “That was a terrible thing I went through; it took me years to get over that mistrust.”