Jewish Louisvillians were among the thousands of people to pack the plaza of the Muhammad Ali Center Monday night to protest President Donald Trump’s executive order barring citizens of seven predominantly Muslim countries from entering the United States.

The Rally for American Values, as it was called, targeted Trump’s order, which affects Muslims and refugees. It has been met by a weekend of nationwide demonstrations, and rulings by federal judges that temporarily block parts of the decree. 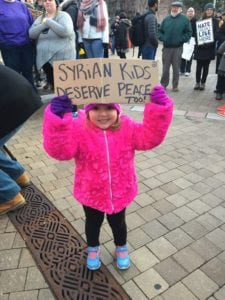 The crowd, including young, old, and many children, spilled out onto the streets. Shoulder to shoulder on the plaza, though, beneath a sign lighting up the word “sanctuary,” they waved myriad signs of their own expressing their anger over the order.

Louisville is not officially a sanctuary city — a city where undocumented immigrants can find safe haven — but a grassroots movement is urging city officials to declare it as such.

Jewish Louisville was represented on the stage as well as in the crowd. Rabbi Laura Metzger was among the featured speakers, urging the throng to stand by the values symbolized by the Statue of Liberty.

Referring to the statue, Metzger borrowed a line from the recent presidential campaign when she said, “I’m with her.”

She invoked her mother, Ann Block, an advocate for social justice, an NCJW activist and a woman who lent her time to help immigrants, teach women to mange their money, and host organizing meetings in her home where she did a little of everything, including pouring coffee for fellow organizers.

Monday was the yahrzeit of her mother, Metzger said. “I can’t think of a better way to honor her than to teach what she taught, and live what she lived.”

Quoting the Torah, and recalling how Jews were unwelcome in lands around the globe, she added, “We have to welcome the stranger, because we know what it feels like.”

Metzger was one of several speakers at the rally, the others were Louisville Mayor Greg Fischer, whose office helped organize the event; Donald Lassere, president and CEO of The Muhammad Ali Center; Rev. Steve Henriksen, chair of the board of Catholic Charities of Louisville; Haleh Karimi, executive director of Interfaith Paths to Peace; Shaky Palacios, a “Dreamer” from Mexico; Louisville Metro Council President David Yates; and Ahmaad Edmund of the Ali Center’s Council Of Students. 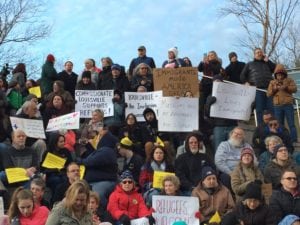 U.S. Rep. John Yarmuth could not attend, but he sent a staff assistant to read a letter from him, in which he stated that he and other congressmen were gathering on the steps of the U.S. Supreme Court, calling on the president to take back his ban.

While not a declared sanctuary city — Trump has threatened to withhold federal funds to cities that don’t hand over undocumented immigrants — Mayor Fischer lauded the city’s foreign-born community, saying they are largely responsible for the growth here, and he promised that police will not use their resources to do the work of federal immigration authorities.

Henriksen, the Catholic Charities chair, said his organization helped to settle 1,300 immigrants from Louisville. Last year. He rejected statements from the administration that the order was not anti-Muslim.

“If it walks like a duck and quacks like a duck, it’s a duck,” Henriksen said. It is our Muslim friends fleeing or their lives [in the countries affected]. It’s a duck.”

Karimi, of Interfaith Paths to Peace, who is a Muslim from Iran, echoed that sentiment.

She pushed back at statements that the order roots out Islamic terrorists, saying the vast majority of victims of ISIS and similar groups are Muslims themselves.

“What happened last week, on Holocaust Remembrance Day,” she said of the order, “should scare all of us.”

In finishing her speech, Metzger highlighted the plight of refugees and immigrants when she added her own words to the last line of the Emma Lazarus poem at the base the Statue of Liberty — “I lift my lamp beside the golden door.”

Metzger added, “I light the way, I hold the door open, I even pour a cup of coffee for someone who’s cold and thirsty.

Asked what Jews can do about the declining levels of affiliation these days, Uriel Heilman had an interesting answer. “Have more kids,” he told the 40-some people at a recent breakfast talk at Keneseth Israel Congregation, most of whom were …