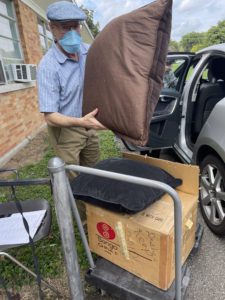 Jeff Jamner, JCC creative consultant for arts & ideas, accepts a donation of necessities for Afghan families during a drop-off day at the Anshei Sfard building. The activity was part of a community-wide effort by synagogues and agencies to support Afghans, recently evacuated from their country, who are being resettled in Louisville. (Community photo by Robbyn McClain)

Jewish Louisville is helping to settle and acclimate new arrivals from Afghanistan as the city prepares to accept hundreds of people recently evacuated from the war-ravaged country.
Kentucky Refugee Ministries (KRM) is settling as many as 200 individual Afghans in the Derby City.
KRM, a local non-profit organization that provides resettlement services to refugees through faith- and agency-based co-sponsorships, is affiliated with the U.S. State Department and Church World Services.
It’s not yet clear how many family units the new arrivals will constitute or where in the United States they are now. What is clear is that Jewish Louisville is playing a major role in their resettlement.
Temple Shalom, Keneseth Israel, The Temple and Adath Jeshurun have all volunteered to sponsor Afghan families, while all Jewish agencies are collecting, or providing food, and other necessities the new arrivals will need.
The Jewish Federation of Louisville is coordinating the effort.
“It is very heartwarming to see the energetic response from the Jewish community,” said Jeff Jamner, JCC creative consultant for arts & ideas, who is heading the effort for the Federation.
A son of Holocaust survivors, Jamner said he understands what it means to be a stranger in a strange land.
“This effort is very personal for me,” Jamner said. “My parents came to the U.S. seeking safety and a better life. They had no resources. It was agencies like the KRM that helped them get a foothold on pursuing those dreams.”
It’s not the first time the Federation has assisted newcomers to the city, said Matt Goldberg, director of the Jewish Community Relations Council.
“The Federation has a long and distinguished tradition of assisting refugees in need, whether Jewish or non-Jews,” Goldberg said. “It’s important that we continue this tradition for Afghan refugees who have suffered so much.”
···
Fleeing their country, which is now controlled by the Taliban, the Afghans coming to Louisville are classified as emergency humanitarian evacuees, according to KRM. They are eligible for Medicaid and food stamps and must apply for asylum after two years in the country.
Each family is expected to have different needs, said KRM Caseworker and Sponsorship Developer Maha Kolko. “We will make sure all these families are taken care of, especially in the first three months of their settlement.”
That’s where faith-based sponsors come in.
Synagogues, churches and mosques are committing for three months, Kolko said. Volunteers from the sponsoring houses of worship are welcoming families at Louisville Muhammad Ali International Airport, providing “rental assistance” for one to two months or up to $2,500, setting up apartments and stocking kitchens with enough groceries for up to one week.
They also are providing welcome meals for families on the night of their arrivals.
Kolko is encouraging volunteers to interact with the families as much as they can.
“I always schedule some visitations,” she said. “Before COVID … we would go to the family’s house; we would be inside. Now, it’s also possible to have outdoor visits because of COVID.”
Each new arrival is at least partially vaccinated, Kolko said.
The synagogues have lined up volunteers and are collecting necessities for the families. Rabbis included appeals for volunteers and donations in their High Holy Day sermons. Some have already collected money and items for the cause.
Some synagogues are even making their own collaborations. For instance, Rabbi Ben Freed, of Keneseth Israel, said his synagogue will jointly sponsor a family with KIP, its in-house pre-school.
···
As for the families’ other needs, Jewish agencies are stepping up.
The Federation is collecting clothing and kitchenware for the Afghans from 1:30-3:30 and 6-8 p.m., Thursday, Nov. 4, at Anshei Sfard.
The Jewish Family & Career Services (JFCS) is offering food and personal care items from the Sonny & Janet Myer Food Pantry, case management and mental health counseling.
“We will continue to work closely with our community partners and expand possibilities for these individuals in the coming years,” JFCS spokeswoman Kristi Quinn said in a statement.
KRM is scheduling furniture pickups at households with donations. Appointments can be made on the KRM website, kyrm.org.
While KRM has interpreters for the Pashtun- and Dari-speaking Afghans, members of the local Afghan community are offering their services, Kolko said.
And some Jewish Louisvillians who are trained therapists have signaled their willingness to help the Afghans cope with the trauma they likely have from fleeing a war-ravaged country and settling in a strange, new one.
Rabbi Freed said helping the stranger is a major Jewish tenet.
“Many people think ‘love your neighbor’ is amongst the most important commandments,” he said, “but the Bible only tells us to do that once. It tells us to love the stranger 37 times.”
While the newcomers are from a Muslim country, Kolko, herself a Syria-born Muslim, said that won’t complicate relations with Jewish volunteers.
“When you give love, you receive love,” she said. “These families, they just want to be here. They are not happy where they are now.”
But she added, “This is a great opportunity for us to come together and help these families, regardless of the question of religion. I think all religions advocate for peace.”

By Lee Chottiner Community Editor For the first time in 18 years, the Louisville Jewish Film Festival (LJFF) is about to change hands. Marsha Bornstein, director of the LJFF since 2005, has announced her retirement in November, but will assist …