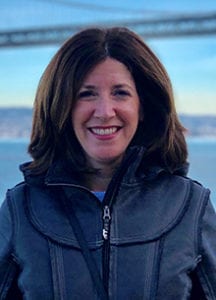 When Bob Sachs was wrapping up his term as chair of the Jewish Community Relations Council, he asked Beth Salamon to take the job.
The mother of two said she was interested, but only after her oldest son, Alex, went off to college.
She’s keeping her promise. Alex, 17, is starting college this fall, so the JCRC just announced that Salamon will assume the chairmanship in July, succeeding Rabbi Stanley R. Miles.
“Bob actually came up to me when the announcement was made and said I kept my word,” she mused.
That’s how Sachs remembers it, too, recalling that Salamon asked for two years before moving up.
“Sure enough, her word was her bond. And yes, at the last JCRC meeting when she was introduced by Rabbi Miles as the next chair, I told her she had kept her promise. She’ll make a wonderful chair.”
The JCRC is Jewish Louisville’s liaison to the greater Louisville community. Its stated tasks include improving intergovernmental relations, protecting human rights and providing advocacy and discussion forums for legislative issues of importance to Jews.
Though new to the JCRC chairmanship, Salamon is an old hand at policy work. She serves as the state policy advocate for the National Council of Jewish Women in Kentucky, monitoring bills in the state legislature that pertain to reproductive rights and other matters critical to women.
She also serves on the Collegiate Board of Trustees, and its Parents Association board. She has been on the JCRC for 10 years.
A native of Bucks County, Pennsylvania, Salamon went to college in Washington, D.C., and law school at Temple University in Philadelphia. There, she met her husband, Michael, who was in medical school at the time.
After she spent a couple of years clerking for the family court of New Castle County, Delaware, the couple moved to Sacramento, California, where Michael started a five-year residency and Salamon worked for the Legislative Council of California, writing and modifying bills for lawmakers in the areas of public safety and food & agriculture and staffing those particular legislative committees.
They spent a year in Iowa City, Iowa, where Michael held a fellowship at the University of Iowa, before moving to Louisville in 2005. Michael is an orthopedic surgeon with Ellis and Badenhausen Orthopedics.
In addition to Alex, the couple has another son, Jack, 14, a freshman at Collegiate.
“Beth Salamon will be a wonderful chair,” Miles, the outgoing chair, told Community. “Through NCJW, she has served our people and community wisely and well. I look forward to working with her.”
JCRC Director Matt Goldberg said Salamon brings “unique experience, passion, and creativity and she is sure to make our community very proud.”
As JCRC chair, Salamon hopes to help the members “find avenues for them for more hands-on volunteering.”
But she stopped short of naming any pet policy issues she wants to take up.
“I’m really excited I’m going to the [National Conference of the Jewish Council for Public Affairs] in a couple of weeks, and I think I’ll learn a lot of things that will ignite interest in me.” said. “I kind of like to listen and find what the group wants to work on.”